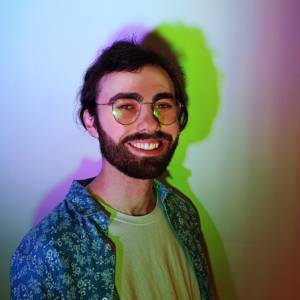 Eddie Casper is a singer, multi-instrumentalist, and producer who was born and raised in Melbourne.

Embodying a "one-man band" approach, Eddie Casper carefully constructs his songs from the ground up, inspired by the likes of his idols Trent Reznor, Kevin Parker, and James Murphy. With a sound entrenched in the traditions of pop music, Casper's songwriting demonstrates an understanding of music both old and new.

Raised with a musical upbringing of classic rock and pop, Casper spent his teenage years dissecting the pop-song formula and honing his skills as a self-taught multi-instrumentalist.

Across several years, Casper gradually pieced together his 2017 debut LP: "It's No Secret". Released on the eve of his 21st birthday, the LP is a focused, 12-track concept album that serves as a homage to the 1960s pop and rock that formed the basis of his musical upbringing. Brimming with grooves reminiscent of The Beatles and harmonies echoing The Beach Boys, Casper captures the magic of the era.

Three years laters, Eddie Casper makes a triumphant return with "She's Got So Many Faces".

Once again, the pop whizz kid performs all instruments on the self-produced track, in what is without doubt his most lush recording to date. Exploring key changes, time signatures and harmonies, the track showcases Eddie Casper's mastery of experimentation, while retaining the catchiness and familiarity of a typical pop song.

Eddie Casper's second album “Ohmage” will be released on 17 October.

Sufjan Stevens, Death Cab for Cutie, Belle and Sebastian, The Beach Boys, Brian Eno
Melbourne VIC, Australia
Indie RockIndie Pop
Indie Rock Indie Pop
Recent mentions of Eddie Casper
No posts found.
Reviews Interviews Soapbox Mixtapes
Help About Advertise Privacy Terms Write for us
Search or choose cover photo
View Apply Cancel
We use cookies on our website to give you the most relevant experience by remembering your preferences and repeat visits. By clicking “Accept”, you consent to the use of all the cookies. Learn moreDo not sell my personal information
Cookie settingsACCEPT
Privacy & Cookies Policy