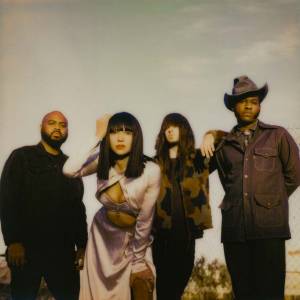 Khruangbin is an American musical trio from Houston, Texas, with Laura Lee on bass, Mark Speer on guitar, and Donald Ray "DJ" Johnson Jr. on drums. The band is known for blending global music influences, such as classic soul, dub and psychedelia. Their debut studio album, The Universe Smiles Upon You (2015), draws from the history of Thai music in the 1960s, while their second album, Con Todo El Mundo (2018), has influences from Spain and the Middle East. Speer, Lee, and DJ also host "AirKhruang" radio shows on NTS Radio and Facebook Live.

Speer and Johnson met in 2004 while playing in Rudy Rasmus' St. John's Methodist Church gospel band in Houston, Texas. The church employed Speer as the guitarist and Johnson as the organist.

In 2007, Speer met Lee through friends, where they initially connected over a shared love of Afghan music and Middle Eastern architecture. In 2009, Speer taught Lee to play the bass. In 2010, both she and Speer went on tour with Yppah and Bonobo—Laura Lee on bass, Speer on guitar...