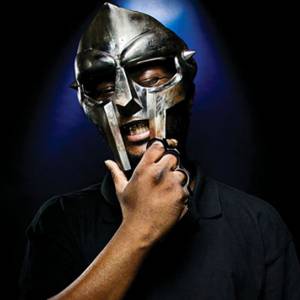 Daniel Dumile (9 January 1971 – 31 October 2020) was a British-American rapper. He performed and released music under several stage names, most notably MF Doom (stylised in all caps). Dumile debuted during hip hop's golden age of the late 1980s and became a major figure in underground hip hop of the early 21st century. Upon his death, Variety called him "one of the most celebrated, unpredictable and enigmatic figures in independent hip-hop".

Born in London, Dumile moved with his family to Long Island, New York, at a young age. He began his musical career in 1988 as a member of the trio KMD, performing under the name Zev Love X. KMD disbanded in 1993 upon the death of Dumile's brother, DJ Subroc. After taking a hiatus from music, Dumile reemerged in 1998, when he began performing at open mic events while wearing a mask. He adopted the MF Doom persona and rarely made unmasked public appearances thereafter. His metal mask resembles that of Marvel Comics super-villain Doctor Doom, who is depicted rapping on the cover of his 1999 debut solo album Operation: Doomsday.

Dumile frequently collaborated with other producers and rappers, most notably Madlib, under the moniker Madvillain. The duo's 2004 album Madvillainy received widespread critical acclaim upon its release and has been cited as Dumile's magnum opus and a landmark album in hip hop. Dumile's other notable collaborations include Danger Doom (with Danger Mouse), Doomstarks (with Ghostface Killah), JJ Doom (with Jneiro Jarel), NehruvianDoom (with Bishop Nehru), and Czarface Meets Metal Face (with Czarface)....

Long Beach, NY, USA
Alternative Hip HopUnderground Hip Hop
This page contains information from Wikipedia, the user-contributed encyclopedia, released under the Creative Commons Attribution-Share-Alike License 3.0. It may not have been checked by editors and as such may contain factual errors.
Hip Hop Alternative Hip Hop
Recent mentions of MF DOOM