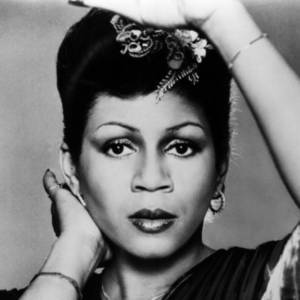 Minnie Julia Riperton Rudolph (November 8, 1947 – July 12, 1979) was an American singer-songwriter best known for her 1975 single "Lovin' You" and her five-octave coloratura soprano range. She is also widely known for her use of the whistle register.

Born in 1947, Riperton grew up in Chicago's Bronzeville neighborhood on the South Side. As a child, she studied music, drama and dance at Chicago's Lincoln Center. In her teen years, she sang lead vocals for the Chicago-based girl group the Gems. Her early affiliation with the Chicago-based Chess Records afforded her the opportunity to sing backing vocals for various established artists such as Etta James, Fontella Bass, Ramsey Lewis, Bo Diddley, Chuck Berry and Muddy Waters. While at Chess, Riperton also sang lead for the experimental rock/soul group Rotary Connection, from 1967 to 1971.

After Riperton died, several artists contributed vocals to tracks she had recorded before her death, to help compile Richard Rudolph's final tribute to his wife, Love Lives Forever. Included, among others, were Peabo Bryson, Michael Jackson, and Stevie Wonder...

Read more at Wikipedia
Chicago, IL, USA
JazzR&BSoulDiscoPsychedelic SoulVocal Jazz1 more
This page contains information from Wikipedia, the user-contributed encyclopedia, released under the Creative Commons Attribution-Share-Alike License 3.0. It may not have been checked by editors and as such may contain factual errors.
Jazz R&B Soul Disco Psychedelic Soul Vocal Jazz
Recent mentions of Minnie Riperton
No posts found.
Reviews Interviews Soapbox Mixtapes
Help About Advertise Privacy Terms Write for us
Search or choose cover photo
View Apply Cancel
We use cookies on our website to give you the most relevant experience by remembering your preferences and repeat visits. By clicking “Accept”, you consent to the use of all the cookies. Learn moreDo not sell my personal information
Cookie settingsACCEPT
Privacy & Cookies Policy