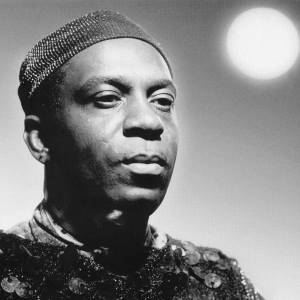 Le Sony'r Ra (born Herman Poole Blount, May 22, 1914 – May 30, 1993), better known as Sun Ra, was an American jazz composer, bandleader, piano and synthesizer player, and poet known for his experimental music, "cosmic" philosophy, prolific output, and theatrical performances. For much of his career, Ra led "The Arkestra", an ensemble with an ever-changing name and flexible line-up.

Born and raised in Alabama, Blount became involved in the Chicago jazz scene during the late 1940s. He soon abandoned his birth name, taking the name Le Sony'r Ra, shortened to Sun Ra (after Ra, the Egyptian God of the Sun). Claiming to be an alien from Saturn on a mission to preach peace, he developed a mythical persona and an idiosyncratic credo that made him a pioneer of Afrofuturism. Throughout his life he publicly denied ties to his prior identity.

His widely eclectic and avant-garde music echoed the entire history of jazz, from ragtime and early New Orleans hot jazz, to swing music, bebop, free jazz and fusion. His compositions ranged from keyboard solos to works for big bands of over 30 musicians, along with electronic excursions, songs, chants, percussion pieces, and anthems. From the mid-1950s until his death, Ra led the musical collective The Arkestra (which featured artists such as Marshall Allen, John Gilmore and June Tyson throughout its various iterations)...

Read more at Wikipedia
Birmingham, AL, USA
ExperimentalAvant-Garde JazzBebopJazz FusionFree JazzSpace Music1 more
This page contains information from Wikipedia, the user-contributed encyclopedia, released under the Creative Commons Attribution-Share-Alike License 3.0. It may not have been checked by editors and as such may contain factual errors.
Experimental Avant-Garde Jazz Bebop Fusion Free Jazz
Recent mentions of Sun Ra