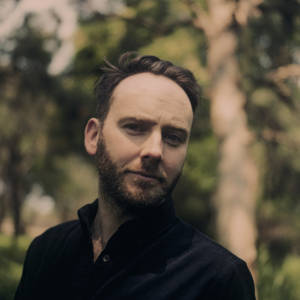 Swimwear (aka Tim Derricourt) began its life at the SXSW festival. Touring with his psychedelic art rock band, Dappled Cities, Derricourt was struck by performers such as Washed Out and Toro Y Moi, creating immersive, psychedelic dance music and performing with it joyful abandon. Over the next while, he knocked out a bunch of tunes on the road, on a laptop, combining the homespun DIY aesthetic of songwriters like Dan Deacon and Panda Bear with his love of grand pop crooners David Bowie, The Style Council, Pet Shop Boys and Damon Albarn.

2012 saw the release of his first EP, The Kissing Machine, and the well-received “Easy High”, a blissed-out track reminiscent of early Beach House or a watery Dennis Wilson. He followed this up with shows and tours with the likes of Walk the Moon and Kishi Bashi before heading back into the studio to complete EPs 2 and 3. Sticking to the upbeat, camp crooning of his first release, Low Summer and High Summer saw further impact, with the anthemic “Hold On” and taught groove of “Cannonball” making further waves online and catching the attention of radio.

Having fallen in love with Richard Yates’ 1962 novel Revolutionary Road and its tale of suburban angst and alienation, Derricourt returned to the laptop to write a song from the perspective of April, the maligned and desperate 50’s housewife, trapped in a cookie-cutter suburban world. The song Night Air emerged. Not wanting to ignore Frank’s story, he wrote a companion song. From there, what began as a songwriting experiment bloomed into a concept album that chart the origins and disintegration of a great love in a time of great change.

Replacing the gated snares and driving kick of earlier work, Derricourt chose a more atmospheric style, crafting an ambient, misty world that perfectly captures those late-night feelings of isolation and uncertainty but also the simple, individual joy of being alone, on the road, after midnight, with nowhere to go and no one expecting you back.

Tim Derricourt
The Blue Nile, Majical Cloudz, Brian Eno
Sydney NSW, Australia
Recent mentions of Swimwear
No posts found.
Sarah Guppy - [email protected]
Reviews Interviews Soapbox Mixtapes
Help About Advertise Privacy Terms Write for us
Search or choose cover photo
View Apply Cancel
We use cookies on our website to give you the most relevant experience by remembering your preferences and repeat visits. By clicking “Accept”, you consent to the use of all the cookies. Learn moreDo not sell my personal information
Cookie settingsACCEPT
Privacy & Cookies Policy