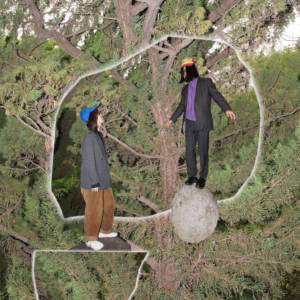 Wedance. It’s a statement and a warning. The duo spend a great majority of their time on stage living up to the name. Often wearing outfits that might be described, with the greatest amount of love possible, as retirement-community-inspired, Wedance, is a singularly difficult band to describe.

The duo met during a chance encounter on the street with Webo noticing Wegi’s unique fashion sense, recognising a kindred spirit and demanding he start a band with her. With songs about everyday life, a penchant for banging on a single cymbal in between dance breaks, dissonant vocals, dissonant guitars, and an accompanying drum/electronic track played (at least up until a few years ago) from an old portable CD player, it’s hard to talk about this band without any musically-seasoned listener narrowing their eyes skeptically and possibly thinking they didn’t know you as well as they thought they did. But against all odds, these features come together to form a glorious confluence of a-tonal, spasmodic pop bliss that can feel at once anthemic and, of course, make you move in whatever weirdo way these unique compositions compel you. Their music plays like a pied piper anthem of indie strangeness, beckoning all to join in on the alt-bacchanal.

Which is the point. The band’s stated mission is to “help people dance through their boundaries (whatever they maybe) and to experience life fully on the other side”. They hope to give courage to real outsiders to show their true selves.

Trying to collect all the Wedance recordings is a feat in itself as the duo usually only carry a few copies of the plethora of their self recorded and self burned EPs around to their performances.