Yuyu Feng (Fishdoll)’s debut album Noonsense – which fuses elements of electro-soul, jazztronica, RnB, trip hop and synthpop – was selected as Sungenre Feature Album for February 2018. Very little is known publicly about this talented artist, so we decided to reach out for an interview.

How would you describe your music to someone who hasn’t heard it?
Hmm this is a hard question, I would say it’s sleepy fish music.

No matter what the result is, I don’t want to waste my life any more.

When did you first start playing music? Have you had any formal training?
I started playing classical violin (when) I was five, but I wasn’t ever interested in classical music because all (I remember) about classical music is I had to play the same tune for three months, trying to get all the techniques accurate. The process is not fun but I definitely learned so much from it. I used to practice 3-5 hours everyday, then I had to stop because (of a) heavy workload in high school. Just like everyone else, I wanted to go to a nice regular college so I had to put aside my passion. You know how much I’m jealous (of) you guys, growing up in an artistically and musically creative environment is rare here. But I guess nothing could stop me from doing it. In college, I got chances to sing and write music and I started playing gigs in hotels and bars, even though I hated the music I played and some people probably think it’s a weird job, but it’s definitely a really important point in my life. That triggered me to go to see the world and do something I really want to do. I didn’t (know how) well I could do in New York, but I had to try. No matter what the result is, I don’t want to waste my life any more.

Are there any local bands you would recommend?
Leah Dou, amazing singer songwriter and her parents are also great musicians, they are one of the biggest influences of my music.

Melody is the last step for me, it’s like a bird, it flies around, then rests on a tree or water. It needs somewhere to land.

How did your signing to Paxico Records, a Brooklyn-based record label come about?
I had a class when I was in New School with Malik Abdul Rahman, the co-founder of Paxico Records. Surprisingly he showed up on a private lesson teacher list while I was looking for a tutor. (The) world is so small, someone I really wanted to meet just appeared in my life like that, it’s really amazing. One time I was really embarrassed to show him my music at his house, I remembered he was listening (to the) “Panaluya” demo and then turned to me like “WTF?”. He said really seriously that he wanted to put it out (on) Paxico Records. That was probably my best day, I can’t believe it. To be honest, I (had) only produced for like one and half years at that time, I know my level. But he really believes in me, so does Chris, who’s the main guy of Paxico Records. A year long phase of struggling, I got my nine tracks done. 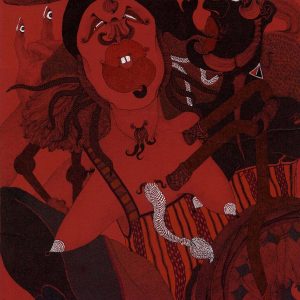 Your songs feel quite abstract and dreamlike. Can you briefly talk us through your songwriting process – do the lyrics and melody come first, or do you sketch ideas on your computer, or something else?
I like to mess around with the sounds in my head first, the tone, the texture, they are like the colours I use for painting. Then I started writing chords. Harmony gets me the most. If the song has (a) beautiful harmony, nothing else really matters. Sometimes it can hit me like electricity, it runs through my whole body and (gives) me goose bumps. If I don’t have any idea to start (with), I’ll just look through my music folder to find samples I can mess around with, chopped up drums, make grooves. Melody is the last step for me, it’s like a bird, it flies around, then rests on a tree or water. It needs somewhere to land. I actually don’t write lyrics, (to) be honest I don’t think it’s that important. This is just my opinion, vocal is always a part of the music, not having lyrics sometimes makes people listen to the music as a whole, allowing them to create a complete picture in their mind. I’m more curious (about) what they see instead (of) what I tell them. I also care the least about genre, it’s kind of a nonsense word to me (laughs). Maybe it’s easier for people to search on (the) internet, I don’t know. When I make music, I just do whatever I want and feel whatever I feel, keep it simple.

I don’t know what’s gonna happen, I just let the sounds inspire me.

Where did you find the samples you used on Noonsense?
It could be particular or totally random. For “Beijing Well” I sampled one of my favourite songs (from) Cine Baronesa by Guinga. I sampled Henri Mancini “Lujon” for “Rice Wine”, the way I sampled it is actually (to) try not to make people recognise it’s from the original music. For “Black Feather” I found a live show video of the band King, they are so awesome, I’m a big fan. I converted that video to audio and just played around with tiny loops. Sometimes a random track in my hard drive can turn into a song. It’s like playing a game, I don’t know what’s gonna happen, I just let the sounds inspire me.

Can we expect a new album or a tour in the near future?
Yeah touring is my dream, I don’t know how to though. I might need someone to help me planning it out next year but If there are (any) possibilities I’ll try to make it happen this year. I’m working on my new album with my partner, that’s gonna be really different from Noonsense. It’s more melodic, acoustic and simple. I really want to put a band together and play it live in the future, it’s always so much fun to interact with people on the stage.

What drives you to create? What are you ultimately trying to achieve or express through your music?
Sometimes (when) I create I just sit there watching TV shows and cleaning up my head. Sometimes I try to make music when I don’t feel inspired and it often comes out terribly. Making music is just what I enjoy to do, it makes me happy, it gives me life. When it can also make other people happy, it’s a bonus. Of course I hope there’ll be a lot of people that like my music, but it’s not my goal and it has nothing to do with happiness. Now if I say something I want to achieve ultimately, (it) is helping young people in China to make and enjoy music. It’s not that difficult for them, they just really need a supportive environment.

If you could collaborate with any artist, in any medium, past or present, who would it be and what would you ideally create?
Past would be Debussy, I would be a classical singer (I actually thought about it). Present, I have a lot of artists in mind like Mndsgn, Teebs, Thundercat… but I probably will collaborate with someone that’s in a totally different field, like sound design, animation or even film. I still believe there is so much potential hidden in me.