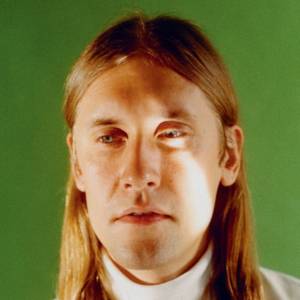 Jaakko Eino Kalevi is an Athens-based Finnish electronic pop musician and former tram driver. With five solo albums, a Nordic Music Prize nomination and a David Byrne collaboration already under his belt, he’s now stepping out as a producer with the release of Frànçois & the Atlas Mountains‘ new album, Banane Bleue.

You’ve just produced an album for Frànçois & the Atlas Mountains. How did the collaboration come about?
Yeah, it’s through Domino Recordings, because we are both on that label and then I think they encourage people who are on the label to work together. And then first it was like a try out [to see] if we could write something together, but then ended up being me producing the whole album. 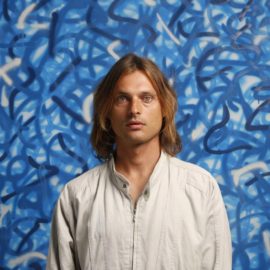 And is producing other artists something that you’re keen to pursue into the future?
Yeah, it was like… I don’t think I have done that. It’s not that different from, I don’t know, making music with other people, but this was like a first experience to produce some other artists. And yeah, very good experience. It was very easy to work with Frànçois.

Yeah. Do you think that you’d like to do that with other artists?
Yeah, definitely.

I’ve noticed that electronic drums are a big feature of this record and also of your solo work. I was wondering what your go-to drum machine is?
On this album, there’s a lot of Roland CR-78. But it’s mostly percussion drums. And then, yeah, usually – yeah, let’s say that. That’s my favourite at the moment.

Okay. I’m assuming that you work with the real deal? You’re not using software plugins to produce these sounds?
Well, actually that drum machine is rare and expensive, so I only have samples.

I guess if you would do something twice, then it would be a new thing anyway.

I’m a big fan of your album Out of Touch. And I found your use of detuning and dissonance really interesting on that album. I was just wondering, what does dissonance in music mean to you and why did you choose to use it?
I don’t know. I think sometimes it brings character and then it makes it more interesting somehow. And then, for example, this one electric piano that I have, it’s just how it is. I guess it could be tuned, but it has its own tuning right now and it’s somehow interesting sounding.

Sure. And do you utilise those sorts of sounds, like the detuned nature of the instrument, as a storytelling device in your songs – or was it just purely because it sounds interesting?
I don’t think there’s a story like that I want to tell with that effect, but yeah, I think it’s just because it’s interesting. And funny also.

Correct me if I’m wrong – I get the sense that you don’t really like to do the same thing twice in your music. Is that correct?
Well, I haven’t really thought about that, but it’s kind of impossible. I guess if you would do something twice, then it would be a new thing anyway. But how do you mean?

I guess there’s been a constant evolution in your sound over many years. I’m just wondering, if that’s the case, where do you think the drive to do something different each time comes from?
Yeah, just to keep it interesting for yourself and then I think, yeah, it’s just very, very natural to go forward and develop your sound and get interested in new instruments and new gear. And that creates a new sound as well. It’s a big part.

And I guess a part of that question comes from – my understanding is that you used to play in a heavy metal band?
Yeah, but as a teenager.

What can you tell us about that?
That’s how I started to play music. We formed a band with my friends. It was like progressive metal. And very good for learning an instrument, because they’re very challenging songs (laughs). But yeah, that was like end of ’90s we had that band. Quite near 20 years ago.

What’s something that you may have bought or acquired in the past five years that’s changed the way that you make music?
Well, actually the electric piano that’s like… the detuned electric piano. Because Out of Touch and the Dissolution EP, both of them I wrote with this. I made instrumental electric piano versions. That’s like the drum machine and then I would play each part bass with the electric piano and chords, and vocal melodies, and other melodies… That was like a new way of composing. Actually, it would be interesting to go back to those versions, because they were like easy listening, instrumental versions of these songs. Might sound funny.

I’m going to go completely off topic, off the subject of music now. I was talking to a mate earlier today about his experiences with paranormal events. Do you believe in ghosts?
Yeah, not really. No, I don’t really have experience with ghosts that much. Maybe it’s because my girlfriend believes in ghosts. So, maybe it’s some kind of a reaction, so I’m like hunting ghosts (laughs). No. There’s no ghosts.

You’re fulfilling the role of trying to reassure her?
Yeah. Exactly.

And what do you think happens to us after we die if we don’t become ghosts?
I think everything just is being recycled. Like your body would dissolve and become earth, or like… Yeah, I don’t know. I don’t have the words now.

By recycled, do you mean reincarnation?
Yeah, or maybe like spirit, or whatever, would put into parts as well. I don’t know what. And it would go to different places. That’s one way like how it could be.

Okay, awesome. I’ll get back to you once I find out. I was wondering if you have a go-to karaoke song?
Yes, I have few. I like “The Crystal Ship” by The Doors, and also “Touch Me” by The Doors, and then “Eyes Without A Face” by Billy Idol. These are the ones I usually go for.

Probably 99% of your listeners are anti-Trump… I think that he kind of had it coming.

Okay. Now I understand that Ariel Pink slept in your bed after a show in Helsinki many years ago? Is that correct?
Yeah. We had an afterparty with many people at my place. And then in one point he was sleeping in my bed, but then woke up and left (laughs).

Okay. I was just wondering what you make of the news that he’s been dropped from his record label, following his attendance at the Trump-led US Capitol Insurrection in January?
Yeah, that’s a weird one. I think like somehow, what would you expect if you do something like that? (laughs) Yeah, probably 99% of your listeners are anti-Trump (laughs). But I mean, at the same time, people should be able to vote whoever or support – it’s just politics. It’s not ideal, but… I don’t know. I think that he kind of had it coming somehow, but it seems kind of like an extreme reaction still.

What’s been the most challenging aspect of the pandemic for you besides not being able to tour?
Yeah, it’s like the money thing, because it’s a big part of my income to play shows. So, I have to get creative and then… Yeah, I think that’s the biggest. And then, of course, I miss traveling, but it’s not really a problem. Just a luxury thing.

Are there any tram lines in Athens?
Yes. Yeah, there is. There’s one. Actually I don’t think I’ve used a tram ever in Athens actually. Yeah, but there’s a good tram line from the centre to the beach. But usually I go there with a car, but I should try it out. And it’s very nice and modern. Although, I like the old trams better. They’re have a lot more vibe.

If you could collaborate with any artist in any medium, who would it be and what would you create?
Hmm. Well, I would like to collaborate with Limpe Fuchs, this German experimental musician. We would make music (laughs).

Has there been any band who announced that they’re quitting and then they actually never come back?

One other quick question while I have you, what do you make of the news that Daft Punk have split?
I don’t know.

Were you a big fans of theirs, or not really?
Well, it’s kind of funny. I just posted about it, because I guess they haven’t been doing anything in almost 10 years (laughs). And also has there been any band who announced that they’re quitting and then they actually never come back? I think it’s more about announcing that like, “Okay, there’s going to be a comeback tour.” (laughs). One more time. And it’s gonna be called “One More Time” (laughs).