Ella Hooper is one of Australia’s most prominent female artists. She shot to fame as a teenager in the 90s as the lead singer of award-winning outfit Killing Heidi and has since carved out a successful career as a radio presenter and TV personality. She recently picked five songs to share with us…

[powerkit_row cols_nr=”2″][powerkit_col size=”7″]Damien Jurado – Cloudy Shoes
Damien Jurado is probably one of the artists on there that I’m a bit newer to. I’d seen his name around for years and years and years on all of these playlists that I liked and recommended by other artists that I loved and I was like ‘who is this Damien Jurado guy? I bet he’s amazing’. And then he is. It turns out like I heard the song – I must have heard it somewhere, at a friend’s house or whatever and then I finally ended up downloading all of his back catalogue and have just been in love with it ever since. I think he’s got a song on that TV show that everyone’s been loving and watching, talking about, about the cult, called Wild Wild Country. It’s on Netflix or something. Anyway, I haven’t seen that but people are like ‘oh yeah, his song might be the theme song for that show’.
[/powerkit_col][powerkit_col size=”5″][/powerkit_col][/powerkit_row]

Gena Rose Bruce – Coming Down
Gena Rose Bruce is an amazing new artist. She’s actually not that new, she’s had a couple of EPs out before and singles out before but she’s killing it with her new stuff. And she’s also my friend and I’ve been sort of championing her for years now and it’s great to see her just killing it. Everyone’s catching on, finally.

The Band – Ophelia
The Band, I just grew up with and they’re my favourite band. I rewatched The Last Waltz for like the bazillionth time the other night and was reminded of how insanely good The Band are. 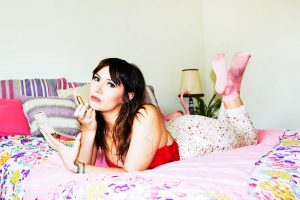 Ladyhawke – Paris Is Burning
Ladyhawke is just something that I keep coming back to year after year, you know, season after season. Just a great song, just a great album. That first Ladyhawke album – I think it’s her first, is just such a killer. All killer no filler, great production. And for me, as a woman who likes to make alternative rock music, there aren’t that many of us, pop-rock female artists that aren’t you know, they’re not straight pop and they’re not straight rock, they kind of crossover… they have that real singability but still you would call them kind of alternative or something. Anyway, yeah I just really relate to Ladyhawke. I think she’s awesome.

Lucinda Williams – Car On A Gravel Road
Lucinda is one of my favourite artists, her songs are just so beautifully written. She keeps on keeping on. I love artists that are really consistent and that continue releasing music into their middle age and stuff. And I think that’s a really hot topic right now, is female artists who are over 30. It’s really interesting. It can get really hard, you know, they still are releasing fantastic music, they still want to tour, and of course in the States – Lucinda Williams doesn’t really have a problem because she’s a massive artist in the States and stuff and she’s really respected and has had such a body of work. But on the other hand, she should be bigger, you know. I think you can go and see Bruce Springsteen, your Bob Dylans, and you know, they’re massive artists for sure. And they will be into their 60s and 70s. But when a woman is into her 60s, and let alone 70s, I mean I can’t even think of one who is touring in her 70s like Bob Dylan is or will be, it’s just interesting, you know? A bit of the old constant conundrum with a life in music, and in how unfortunately innately sexist the industry has always been and now we’re realising it and naming it and locating it and talking about it, which I think is really important. It’s a shame to have to keep talking about it, but I think we’re really realising that if we don’t talk about it, it just goes under the radar and it really affects how broadly we listen and what kind of influences we’re pulling from, and of course it affects the career of the artists who fit into that dead zone, you know. And I just think it’s just something on my mind. But that’s not why I picked her, I picked her cos she’s awesome. She rocks harder than dudes half her age.