Richard In Your Mind are an Australian psychedelic pop band. Their frontman Richard Cartwright chose five songs to share with us.

[powerkit_row cols_nr=”2″][powerkit_col size=”7″]Alyx Dennison – I Don’t Love You Anymore
I could have chosen any of her songs but I think Alyx Dennison is one of Australia’s best musical beings (laughs). And she was in Richard In Your Mind for a while and she’s sung on albums and stuff. We really should have got her on our new one, but I think she’s just had a baby and I dunno, I live in the mountains and it just sort of didn’t – it was easier to – I dunno, I wound up doing the backing vocals. But we should’ve invited her, made the effort (laughs). But yeah I chose that because I think she’s just – I dunno, just the way she uses melody and she’s so unpredictable in her songwriting and she effortlessly has original ideas and yeah. I think she’s a cool legend. And that particular song is so cool, it’s got no melodic or harmonic instruments, it’s just percussion, except for vocals. Yeah, so it’s just all this tribal thing. [/powerkit_col][powerkit_col size=”5″][/powerkit_col][/powerkit_row]

Raindrop – Another World
Miles from Raindrop is a wonderful friend and a cool musician and Spod mixed and helped produce his latest album. Most of our albums have been done with Brent as well. And I really think it’s been an amazing job on this work. We’ve played plenty of shows with those guys and I really love, I dunno, he maybe has a similar approach in a psychedelic way. And he loves cool synths and playing in the studio. So they’re kindred musical spirits there. 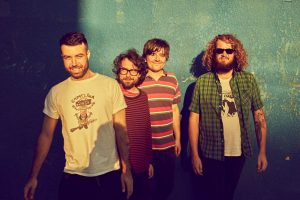 ‘Meditation or psychedelic drugs’: Richard Cartwright on the origins of Super Love Brain

Captain Beefheart – Observatory Crest
I’ve only really gotten deeper into Beefheart in the last few years. And I probably don’t listen to lots of him, cos like he’s pretty weird and stuff. I like weird music, don’t get me wrong. But I kind of like chilled out, relaxing music probably more. But I went through his discography, as you can do these days… and I love the stories about him and his musical, like his ten commandments for playing guitar or whatever he has. And I think as a story he’s an amazing character. But he’s also got these, you know, scattered throughout his works, these chilled out, lovely, sincere, pretty, beautiful songs. And I think “Observatory Crest” is one of them. If all my records could sound like that song then I’d be happy. It’s just so kind of lush and crisp and floaty. And he talks about seeing flying saucers and stuff. So I love that song.

Lee “Scratch” Perry – Dub Revelutions
Probably like, 70% of the music I listen to is old reggae and dub. Just I think it’s a good background to life kind of music. It’s harder to be sort of upset and things with reggae music. I think Lee “Scratch” Perry is a visionary. He sort of seems to be a weird, lightning conductor channelling just the vibe or something (laughs). His approach to production is amazing. He chooses these really loud percussion and the drums are quiet and he just sings “la la la la la” (laughs)… I think he’s one of those guys who if it felt good he did it. So I think that’s an inspirational philosophy I take from him.

Raul Seixas – Metamorfose Ambulante
I explored Brazilian music a while ago and really loved a bunch of it. I think I really loved Os Mutantes… they’re a cool 60s kind of Tropicália band. They reformed and we supported them at The Enmore, which was like the highlight of our life, sort of. But yeah, through them I started exploring old 60s and 70s Brazilian music. The people of Brazil obviously love music very passionately and so there’s heaps of good music in there to be uncovered if you go looking in the world of Brazilian music… This one particular song I just really loved. It’s got a cool, squelchy synth bass in it but it’s also got this really pretty guitar, it’s got a lovely intro, it just feels good.