“I wrote this song a little while ago when I was having trouble sleeping,” Foy says. “Except I wasn’t having trouble sleeping, I just didn’t want to go to sleep. So I’d stay up til 4 or 5 every morning just wasting time, get up the next morning feeling like shit, and do it all over again. Really it was a self-imposed insomnia. So I guess the song is about that, you’re doing something to yourself that only makes your life worse, but it becomes such a habit that you just keep going on autopilot. I’m pretty sure everyone has done that in one form or another at some point.” 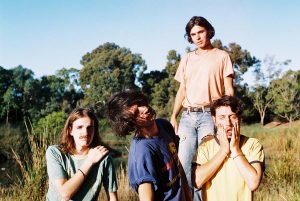 On the process of making the tune, Foy explains, “I recorded the song at my old house in the bungalow we had out the back. I’m a drummer first and foremost, so I recorded that first from my head, which meant there was a lot of room for freedom. Then I layered each other part on top one by one, just filling in holes where I thought I should. It’s a pretty methodical way of doing things.”

Donny Benét talks cricket, politics and being a hypocrite