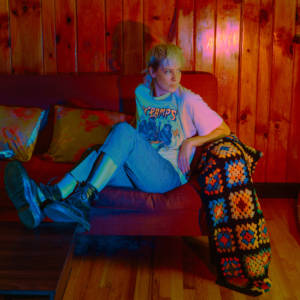 Clever Girls’ newest album is essentially a concept album, albeit a loose one. Written between tour dates following the release of their 2018 debut Luck, the ten songs on Constellations are born out of a singular life event. Singer and guitarist Diane Jean spent much of the pandemic last year not just holed up in quarantine with their cat, but also living their life as a newly affirmed non-binary individual.

That life change strings together the bulk of the tracks on Constellations, with Jean and company finding new challenges and experiences in their well to pull from. “Stonewall”, possibly more than any other song, sums up that paradigm shift – detailing the struggles and relationships associated with someone who has struggled with being assigned female at birth. Released as the third single, it binds the album’s themes of isolation, not just as someone quarantined during the pandemic but as a person ascribing to a different set of gender norms than what suits them.

Jean’s ability to transcribe the message behind “Stonewall” into a succinct pop song finds exactly the right note. Throughout Constellations, Clever Girls never comes off as preachy or even necessarily socially conscious. Instead, Jean focuses on their personal relationship with isolation, with their attempts at understanding who they are as musicians during a pandemic and as a gender non-conforming person. While these tracks have specific meanings to the artist, they’re built well enough to appeal to universal feelings of pain, exhaustion and identity issues during the pandemic.

That approach pays off well for a band like Clever Girls, whose personal stories and lyrics will mean more to the listener than self-serving platitudes. “Baby Blue” does its best at broadening Jean’s darkest experiences during the early days of the pandemic to become universally affecting. They are the feelings of waning hope and increasing uneasiness that punctuated a continually moving expectation of normality. Again, that desperation eventually drives the track towards a happy ending, and being that the song was actually written before the pandemic helps give it legs. Specifically though, the song finds its greatest success in its dingy production, something the band likes to call grunge-pop. But Clever Girls never leans too heavily into any kitschy distortion tricks, instead they highlight their dirge just as much as the shimmer of Jean’s vocals.

Not surprisingly, the band’s strongest effort may also be their most upfront and catchy. On “Saturn” the four-piece kick off a well-written, well-executed showstopper, a song where the verses are bright and crisp and the chorus ends up fuzzed-out. More than on any other track, the rest of the band each finds their time to shine here, with Winfield Holt on guitar, Tobias Sullivan on bass and Rob Slater on drums. If the band is constantly evolving, “Saturn” should be their roadmap.

Hailing from Burlington, Vermont, Clever Girls could easily sound like any other Vermont-alt-guitar group and in fact, that’s pretty much how they sounded on their debut. But Constellations on the other hand, arrives after a three year gestation, something the band clearly needed, and the result is refreshing. Diane Jean spent those three years acknowledging who they were and embracing that change throughout each part of their life, only to be met with a pandemic that limited them and their band members’ livelihoods. The result is more than a quarantine record or an isolation record – Clever Girls are making music about their own lives that resonates with their audience, and it seems like they’re getting better at it. Constellations is not a great album, but it is a success and one that ends with rejuvenation instead of exhaustion.