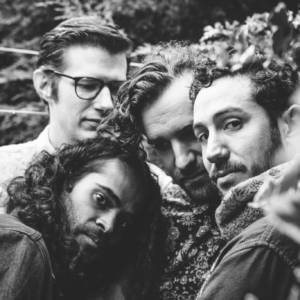 When Darlingside first got started back in 2009, their brand of Americana, complete with group harmonies, banjos and mandolins, was in high demand. Outside of the burgeoning singer-songwriter movement of the 1960s, it’s hard to remember another time when that genre caught the cultural consciousness in the same way. The main difference of course, is that while the songwriters of the ’60s were finding old and forgotten folk songs, resurrecting them on the pop charts and rebelling against the hipness of psychedelia, the late 2000s mostly offered only an empty sense of revivalism.

Mumford & Sons, The Lumineers, and The Head and the Heart all helped to herald the movement, becoming outsized and bloated enough to sell out stadiums and leave their mark all over easy listening radio stations for years to come. These groups disguised their pseudo-intellectual lyrics and pop-centrism behind trendy old fashioned clothes and manicured moustaches but at least made it possible for thousands of better bands to get their record deals and capitalise on that same zeitgeist.

But Americana has always been around, and it has always held an innumerable influence over groups since well before the 1960s. As easy as it is to discount the musicians who stripped the genre to a pandering banality, the resurgence did bring about some of the genre’s strongest contributions. Fleet Foxes, Laura Marling, and The Tallest Man on Earth all helped to push the movement into the 2010s, developing music that looked towards the past, present and future simultaneously. Somewhere in the middle of those best and worst case scenarios, there was Darlingside.

Hailing from Boston, Darlingside is made up of four different vocalists: Don Mitchell, Auyon Mukharji, Harris Paseltiner and David Senft who all juggle the band’s different instrumentals. Their first few albums found the group well equipped to fit right into the sound they were a part of, but not memorable enough to stand above their peers. Darlingside’s newest album Fish Pond Fish, comparatively, is their best yet. As the group has developed over the years, their sound hasn’t really changed, nor has the band’s musicianship, which has always remained strong. What the band has improved on is their songwriting, and if there is one thing defining Fish Pond Fish, it’s the development of tracks with distinctive melodies and structure.

Following a brief false-start in “Woolgathering”, album truly opens with “Crystal Caving”, offering a surprising twist on their formula and featuring a propulsive rhythm section that evokes the same anxious catharsis of Junip, but without the payoff. Still, the atmosphere and seasonal lyrics make for a much more conflicted melancholy that works well for the band. Similarly conflicted and easily the most memorable song, if not the most frustrating, “Time Will Be” follows a consistent pop formula: the stripped-back chorus, the vague and overly conscious lyrics, and the auspice of a love song. While the band proves well-adept at sifting their sound through this pop formula, they shoehorn too many clichés for it to sound genuine.

The band’s melodies find more success on much simpler songs, whether it be “Denver”, where the instruments almost completely overtake the vocals without minimising the beauty in their harmonies, to a nicely jarring effect, or on “February/Stars”, a song that works very well as a demonstration of the band’s musical capacity, more so than on the strength of the song itself.

Most of the songs on Fish Pond Fish though, revert to the group’s old habits. “Keep Coming Home” lacks the memorable melodies of the album’s highlights, featuring not much more than some interesting production and instrumental embellishments. “Ocean Bed” and “Green + Evergreen” likewise are pleasant enough, featuring a jubilant arrangement and the homey charm that drives the band’s appeal. But it lacks enough personality to register above the rest the bands Darlingside compete with.

Fish Pond Fish is a pleasant and light album; an album that doesn’t aim for the kind of crossover appeal that can headline a festival but that also lacks the experimentalism that can drive critical acclaim. Despite developing a fan base in the explosion of folk revivalism and developing a bad habit of singing around the same microphone, Darlingside are not a product of their time, never giving in to a specific trend, just making the music that they want to make at the time when it’s the most popular. The band may not have a singular sound, but as they’ve progressed they have got better at making that sound more interesting. Even if a lot of Fish Pond Fish doesn’t measure as much more than acoustic cabin fare, those touches of insight coupled with rich and detailed instrumentation are worth noting.