Reflection has forever been a cornerstone of James Yorkston’s critically-acclaimed folk compositions. Five solitary years spent crafting The Route To The Harmonium in the small Scottish fishing village of Cedardyke appears only to have sharpened this perceptiveness. With a title that implies a path to peace, the Scotsman’s ninth release charts some serene arrangements whilst voicing conflictingly grounded existential qualms with reality. 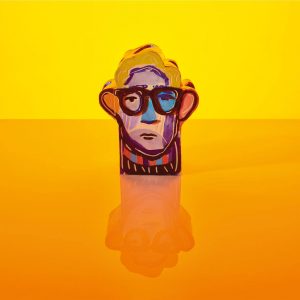 Over eight solo albums, Yorkston has managed to blend contemporary roots and folk with a soft-spoken, poetic wry humour that addresses his national heritage. Originating as the bass player of cult-band The Fence Collective, his solo career catapulted following John Peel endorsing his debut 7-inch “Moving Up Country, Roaring the Gospel”. Signing with Domino in the early 2000s, Yorkston has since worked with an eclectic slew of producers (Four Tet, Alexis Taylor), earned album of the year accolades and penned two books. With family and friends at the centre of his latest introspection, there’s both beauty and heartache within.

Like a music box opening for the first time, twinkling bells and trinkets add an antique charm to opener “Your Beauty Could Not Save You”. A fingerpicked guitar and trumpet anchor Yorkston’s soft-spoken laments of a tortuous prior relationship; “Did you expect me to breathe, did you expect I would be happy”. This conflicting sense of musical harmony and thematic discord foreshadow the album ahead.

“The Irish Wars of Independence” is the first of three spoken word songs on the album. The rolling folk guitar underpins a melodic chorus that buffers the poetic verses denigrating the role of religion in the historic division and disunity within his home country. Continuing this theme, “Like Bees to Foxglove” similarly speaks of people’s false hope in the spoken word of God; “All the common sense cannot save a man from this”. Set among a serene soundscape of an acoustic guitar and violin pairing, further additions of female backing vocals in the chorus hereby infer that ignorance does not yield bliss.

Having previously worked with electronically-minded producers, Yorkston shows a penchant for a synth on “Shallow” with a driving metronomic bass and spacey piano chords. The Scott’s quiet, Chris Martin-esque husk moves effortlessly throughout the primary progression, however, the melodrama of the chorus feels embellished. By contrast, the sub-three minute “The Blue of the Thistle” is Yorkston at his concise best. The melody of both voice and guitar arpeggiations endow each progression with a subtle, special something, causing the mind to daydream between both beautiful and mournful memories.

“My Mouth Ain’t No Bible” is the first to utilise drums, driving straight into a fast-paced march of snares, recalling “The Mercy Seat” by Nick Cave & The Bad Seeds. Guitars glisten as Yorkston stands atop his soapbox declaring the failures and successes of an antihero; “I’ve got all of the skills and none of the direction”. Musically it fails to move anywhere beyond this, relying on the arresting impact delivered by Yorkston’s spoken word, of which many lines fail to support its seven minutes.

Lush synths underpin the ukulele plucks of the lighter, catchier ballad “Solitary Islands All”. Doubled vocals in the chorus strengthen its hook as the animated picking creates enchanting melodic twists and turns. Yorkston’s tale detailing the struggle for love amid the adversity of their locale on “The Villages I Have Known My Entire Life” garners as much texture as possible from a simple piano and violin pairing. The field recordings of ambient seaside life further weigh the lyricism with impact; “We did shout and cry at one another before we hated where we were”.

Fast-paced rolling fingerpicked guitar blends with a pulsating synth bass to serve as the backbone to “Oh Me, Oh My”. It’s in this hypnotic, emotional ambiguity of the song that Yorkston is truly able to celebrate family and relationships, without losing sight of the darker shade of loss; “This love was no true love, this love was a false love, you broke the will out of fear”.

“Brittle” sees the most colourful arrangement on the record meld guitars, keys, sax and violins for a light-hearted, ever-ascending progression over which Yorkston tells of masculine weakness; “I am as brittle as the next man, no heart of stone, no endless well of love, I have shut it all off”. A late burst of electric guitars usher in the frenetic “Yorkston Athletic”. Drums and accordion/harpsichord flitter in and out, some sounding off key to further the manic nature, mirroring his musings on life’s pace; “Are we on the fast train to blissful inner peace, maybe this is why life speeds up”.

Closer “A Footnote to an Epitaph” is, for everything that comes before it, a funky, catchy way to round out a thematically dense record. The rhythmic keys and the untethered trumpet give life to Yorkston’s more portent displays of affections in what is a bright finish.

James Yorkston’s return after a brief hiatus sees him failing to rest on his prolific laurels. The folk soloist raises rich themes of ambiguity, human fallibility and religion while pitting them against sophisticated folk song writing. Though hampered by moments of inconsistency in length and impact, his ninth release is sure to solidify fans and deepen his hold on contemporary folk’s mantle.