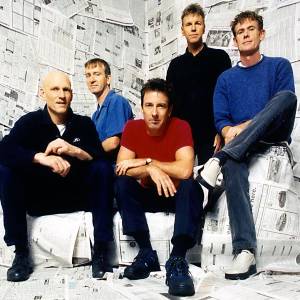 There are few bands who pulled off politically motivated music that retained its alt-rock idiosyncrasies of the ’70s and ’80s like Midnight Oil. Through Peter Garrett’s seizure-like style and an environmental/anti-establishment ethos, they’ve earned themselves a legacy within Australian music folklore over their cumulative 34-year career. On The Makarrata Project, their first original music in nearly two decades, the New South Welshmen have brought their pro-Indigenous principles even further to the forefront by infusing First Nations artists into their songwriting fold. As trailblazers who not only used their status to make First Australians a key facet of social consciousness but made it their art form, this mini-LP is a triumph, albeit one that fans may feel is too musically detached from their back catalogue.

When the Oils first wanted to bring their music to remote Indigenous areas around Australia in the ’80s, they needed to rethink their over-amplified act for something more suited to their audience. Reflective of this revision, Diesel And Dust (1987), which featured the unifying anthem “Beds Are Burning”, became the first example where Garrett and co. were able to channel their sonorously skewed take on rock into a unifying movement behind the social cause. While The Makarrata Project similarly sets out to tackle Indigenous issues and the white man’s responses, or lack thereof to them, it fails to consistently realise their eclectic sound, opting instead to open themselves up to the influence of other artists in a way that feels more like a compilation album than an Oils’ one.

The classic cowls of Garrett open the account on “First Nation”. The counterpoint of upbeat funk-rock smashed against a gloomy chord progression and backing vocals feel like Midnight Oil as they were at full strength. Add to this a pulsing sub bass synth which Tasman Keith waxes lyrical over whilst Jessica Mauboy offers a sobering touch of tenderness to the frontman’s animalism, it’s hard not buy into this contemporary reinvention of their sound. Most importantly, the direct prescience of Garrett querying, “when we gonna have the conversation” makes this opener an unashamed anthem we’ve been waiting 20 years for.

“Gadigal Land” follows up with another return to bombastic alt-rock form. The horns that made “Best Of Both Worlds” (1984) and “Power and the Passion” (1982) so striking return here with a strong sense of nostalgia as crunching guitars and Garrett’s wide-sweeping wails refute the impacts of colonisation; “We don’t need your convicts, we don’t need your thieves, we don’t need your squatters, or your emancipees, don’t you dam our rivers, and don’t you fell our trees, don’t you carve our wilderness, don’t you net our seas”. It’s another wonderfully pointed track that feels like a band well in touch with their past and what’s needed in the present.

Featuring posthumously, Gurrumul’s transcendental opening vocal on “Change The Date” signposts a sonic change of tact for the record. A ballad anchored by piano runs and acoustic strums is kept moving by Bob Hirst’s percussive mastery whilst Dan Sultan elevates the second chorus, rousing us all to think better of our national holiday; “Draped in flags on this grand day, drinking down your chardonnay, how long can you just look away”. With a mournful descent through the chorus intended to instil the shame that activists on this day shout in protest, it’s a more sombre catharsis that many Oils fans would come to anticipate compositionally.

The crowning achievement of the record feels like Alice Skye’s “Terror Australia” midway through. The band seemingly relinquish complete control to the Wergia/Wemba Wemba woman who has already made her stamp on the Australian indie-scene. Skye’s piano ballad, whilst reminiscent of the verses of Mike Brady’s “Up There, Cazaly” (1979), reinforces the sentiments of ignorance with poetic poise; “Now you can’t talk about the future, still running from the past, it’s a terror in Australia, jails and guns and failure”. The climactic arpeggiation is more muted than melodramatic, intimately played and sung as if a craft of the heart with the power to shake the foundations of those unmoved by the plight of indigenous people.

Supported by the night-time ambience of the Australian outback, Frank Yamma prefaces the folk ballad “Desert Man, Desert Woman”, in Pitjantjatjara. Strumming away whilst invoking ideas of “moving along in the great outback,” with a spiritual serenity he polarises this against the “winking, spitting and sparkling lights, cars screamin’ at traffic lights” of the cities. The ethereal subtext conjured by swirling echoes of phased guitar makes it all a meditative meander reminiscent of losing oneself in the natural terrain of the land.

“Wind in My Head” moves into an upbeat and sharply produced pop-rock tune. In a similar way that “The Dead Heart” (1987) creates a sense of sonic mysticism through a tense verse, near-gospel backing vocals and chorus calls help resolve this modern take into something far brighter. Kev Carmody and Sam Butcher’s partnership later on further placates for the significance of natural beauty, conservation and Indigenous meaning in the land.

Closing with a spoken word recount of the “Uluru Statement from the Heart” by key indigenous figures helps lend the record a sense of action. Having established energy and emotion on the preceding songs, directing it towards the need for a First Nation’s representation in the constitution helps offer a way forward. As a funky bassline builds over sweeping synth planes, the guitars of “Come On Down” rise up and is an attempt at unifying the masses after a sermon. It’s unfortunate that it all feels like a little clichéd, conjuring unrealistic images of literally gathering around the campfire and singing this rather than “Kumbaya”. Understandably an attempt at uplift, it pales in comparison to the affecting tales and compositions that preceded it.

On a live recording of “Lucky Country” from 1985, Garrett opens with an assertion that “all these people that come from the down under land aren’t like… all the Larry’s who’ve made their money putting their boots into their own” before diving into a post-punk grind befitting that of any contemporary Melbourne dive bar. It is a great example of why they were so beloved. This latest album is different. Whilst the opening tracks of The Makarratta Project feel emblematic of the Oils, the rest of the record gives the microphone over to a set of artists who are more accurately able to express the issues that Peter Garrett tried to convey. Whilst lovers of Midnight Oil’s sound alone may avert themselves, true fans will ask why it’s taken so long to happen.