Midway through Snail Mail’s 2016 EP Habit, Lindsey Jordan (then 17 years old) articulates her musical philosophy perfectly as she notes “when I’m 30, I’ll laugh about how dumb it all felt,” amongst a swirl of angst-ridden, garage rock. It was just a taste of the unique sensibility that makes Lush, the outfit’s full-length debut so compelling. It’s a record that all at once is calculated, emotive, and honest – seeing Jordan inject a fresh sense of confidence into her songwriting whilst remaining relatable.

Lush is a record that is quintessentially teenage, tackling themes of unrequited love, self-doubt and aspiration. It’s not the most original of subject matter, but armed with her guitar playing skills (enhanced by teachers that include Helium frontwoman Mary Timony) and a refreshing self-awareness, Snail Mail’s music shines an honest light over adolescence. Jordan does not glamorise, neither does she whine or scorn. Instead she elevates intimate stories of youth into a relatable coming-of-age narrative, even to those whose growing pains have long since faded.

The album opens in a humble fashion with the aptly titled “Intro”, a light, buzzing track that stretches barely over a minute. It’s a warm introduction to Jordan’s voice, which sounds like sunshine glowing through a dust-coated window, as she croons gently over nothing but a simple, glazed, guitar lick. It’s a modest appetiser to what is arguably Lush’s crown jewel, “Pristine”. Driving forward with a thumping riff adorned with tight, crashing percussion, the single immediately occupies a much larger sonic space than its predecessor, showcasing Snail Mail’s graduation to a more polished and developed sound. The song finds Jordan in a familiar plight as she attempts to comfort herself over the sting of an uninterested crush, shielding her infatuation with nonchalant shrugs of “anyways”. It’s a balance that culminates through an anthemic chorus, as Jordan does away with sensibilities, belting, “And don’t you like me for me?  Is there any better feeling than coming clean?  And I know myself and I’ll never love anyone else”.

Though she reaches melodramatic heights, it’s Jordan’s sincerity that pulls the track back into perspective as she perfectly harmonises the realism of teenage heartbreak with its absurdity. In the shadow of “Pristine”, Jordan reels in to a more gentle tone with “Speaking Terms”, leading in with a light, plucked guitar lick which resembles something of a sunnier Sonic Youth, seeing Jordan further demonstrate her creativity on the instrument. Her craftsmanship is strikingly patient as the song wades into a fuller production, her harmonic vocals weaving around lulling percussion and lustrous synth. Its effect leaves the listener submerged in a deep pool of sound without even realising how they got there.

Jordan may be lovesick, but perspective is her remedy, as she makes clear on “Heat Wave”, a track that returns to the rollicking plane of “Pristine”. Though it stands as Jordan’s most instrumentally adventurous number, she opens with a hint of lethargy, her glassy vocals weighing the song with both dissatisfaction and desire for an uncommitted lover. As an array of tight, controlled chords and scorching guitar work to colour the space around, Jordan’s lyrics throb with heavy-hearted acceptance as she reasons, “I’m not into sometimes”. Through “Heat Wave”, it becomes clear that Jordan is primarily a guitarist over a singer, as her wild, electric shredding bears just as much bite as her lyrics.

Since signing with the prestigious Matador Records in 2017, Snail Mail’s sound has moved out of the bedroom and into a more clean and sophisticated realm. “Stick”, the only track from the EP to make it onto Lush, encapsulates this development, having been tightened and polished with a fresh sheen of production without sacrificing its raw and rugged atmosphere. The track sees Jordan fully embraces her sentimentality, pausing her controlled and levelled demeanour to unleash an unhinged cry of emotion that takes the lead over loose, swelling drums and a steady, reverb-drenched riff. 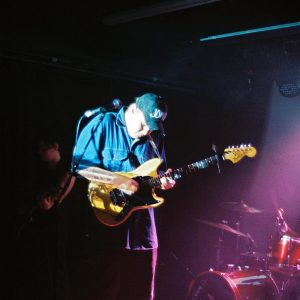 “Let’s Find An Out” marks a descent from the drenched echoing of “Stick”, instead displaying a delicate and stripped-down side of Jordan. Showcasing signs of her classical upbringing with an intricate display of folkish guitar play, the lyrics see Jordan clinging to a fading hope for a relationship showing its cracks. “Let’s Find An Out” proves that Jordan can not only be wild and hard-hitting, but also increasingly intimate. As the record progresses, it becomes apparent that the backbone of Snail Mail’s power is the layered nature of Lindsey Jordan’s songwriting. In “Golden Dream”, she drearily recalls a night of regrettable decisions with fading chides of “stupid, stupid me”. However, Jordan does not let herself drown in self-loathing, instead reclaiming her independence with an assured cry of “I’m not yours,” as an uplifting buzz of polished guitar coats the track in optimism. It’s a resilient attitude that carries on to “Full Control”, as she sings of taking the wheel and ending a relationship before it can spiral out of control. With its hard-hitting percussion and unyielding vocal delivery, the song rallies between exasperation, hurt, and tenacity – all tied into a neat, tidy parcel of indie rock.

As Lush draws to a close, penultimate track “Deep Sea” reigns in the rock to a slower, more somber territory. Production wise, the song is dense, as a wallowing layer of brass swims below beneath a shrill, fuzzy guitar. The number is a reminder of the vulnerability laying beneath Lush’s biting, assertive persona, as she elevates her deadpan drawl to an aching, melancholic wail. “Anytime” is Snail Mail signing off, a closing track that is nothing more than gentle strum in accompaniment of her clear, clean voice. The lyrics quite literally bring the album full circle, mirroring that of “Intro” as Jordan selflessly prompts a lover to “go and get it all”. With an assured wisdom, the closing number sees the teenager grapple with the realisation that despite the array of emotions Lush encapsulates, there is only so much she can control when it comes to love. With a gleam of synth and an affectionate token of “I’m for you anytime,” Jordan is finished, allowing her record to evaporate just as gently as it arrived.

Lush in its entirety is a memoir of a teenage girl doing the best she can, living, loving, fucking up and most importantly, learning. Perhaps that is why Jordan’s highly intimate songs do not, at times, allow for the most immersive material. Though each track undoubtedly carries an intelligence and passion, their power is often subtle, running the risk of oversight amidst Snail Mail’s drawling slow-core, which does on occasion grow slightly homogeneous. In spite of this, Lush remains a strong debut from a unique and undeniably talented musician who does not attempt to be anything else but herself.