Melbourne’s Citradels have been quietly prolific for a number of years, releasing at least one album each year since their debut, Psychotic Syndrone in 2013. While much of their work has been steeped in heavy 60s influences, their sound has gradually evolved from loose, druggy drone/raga rock, also taking from predecessors such as Spacemen 3 and The Brian Jonestown Massacre, to a more streamlined but no less alluring psychedelic pop sound. Fuck The Hits: Vol. 1 is The Citradels’ second album for 2018, after January’s religious cult-themed concept album God Bless. On this new effort, they do away with the conceptual element to deliver a much more brisk, relatively more straightforward collection of psychedelic pop nuggets.

While the album is overall still deep in the 60s vein, from its first moments, something feels just slightly off. After a brief, playful guitar intro, opener “Song For Ava” enters into an odd, mechanical vocal loop that seems to start just a little too early. During the second verse, another looped vocal burst enters, this time almost directly calling back to Panda Bear’s “Comfy in Nautica”, another artist the group has been inspired by. The song itself is a bittersweet delight, though, almost like a fluttery baroque pop cover of The Cure’s “Boys Don’t Cry” by way of Belle and Sebastian, with a breezy violin melody, pretty harmonies and buoyant handclaps.

It only gets more uncanny from here though, as the songs seem to drift in and out of a dream state, coming in and out of focus. Some are also linked by strange, sometimes unsettling collages of field recordings and haunting sound effects, such as the second song, “The Oriel Window”. Bookended by sounds of a quiet bustle, the song is like a daydream or fond reminiscence, a laid-back and gentle fairytale that ends abruptly, with a long-sustained guitar chord as the sounds gradually fade back in, like a slow pan back out into the street. 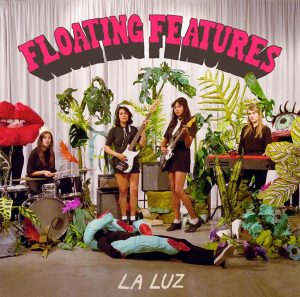 It may not be amiss to compare this album to another effort from earlier this year – La Luz’s Floating Features. Aside from the first half of the heartbroken “She Won’t Say” somewhat sounding like that album’s “California Finally”, both albums have an overarching dreamy aesthetic. Though whereas that album features these themes more overtly in its lyrics, with the music colouring in the spaces, it’s the opposite here as it’s the instrumentation and underlying haunted atmosphere that bring it out. The back half of “She Won’t Say” takes a completely different turn, with a distant, eerie lo-fi fragment of a song, constantly being almost drowned out by a disturbing ambiance, like someone’s campfire song struggling to be heard through the sounds of a forest.

“In Each Other’s Arms” is just a genuinely sweet song, maybe the most blissful moment on the album. The precious descending harmonies in the chorus ring out like the best day spent doing nothing with a loved one and curled up inside on a dark, snowy night. On the other hand, “Little Angel” sadly falls short – though it opens promisingly, with a Indian-sounding motif and an addictively catchy guitar melody, the rest of the song does drag somewhat and doesn’t quite capture the sweetness of the title.

On that note, towards the album’s back half, a few of the songs do have a winter holiday feeling, brought out by Christmas bells, like “I Do (Love You)” and “Passover”, but especially the penultimate song, “White Lilies”. Opening with what sounds like a cheesy Christmas card greeting, played on cheap synths and drum machines, the singer delivers a very over the top baritone croon. That is, before the song kicks into gear with a lively horn section and a more celebratory mood.

While parts of the album teeter on unsettling, it is the closer, “A Seat at the Table”, that really drives home the album’s uncanniness. The song slowly rises out of a haze of disconnected noises, with little more than quietly plucked guitar arpeggios and a lonely vocal line. What really gives it an almost nightmarish element, though, is the high-pitched drone that constantly hangs in the foreground, putting everything into an uncomfortable focus. It certainly makes for an unusual, slightly chilling end to the album.

With Fuck The Hits: Vol. 1, The Citradels have delivered a very intriguing effort of sweet, hauntological psychedelic pop. By tightening up their sound, they have brought out some great pop sensibilities in reimagining the sounds of 60s psychedelic pop. While it’s certainly not perfect, Fuck The Hits is a curious listen that unfurls its uncanny sound world with repeated listens.