Habitual Eater is the debut album from Van Goose, the be-all-end-all solo-project of Israeli-American Shlomi Lavie, who is best known for his tenure as the drummer for band Marcy Playground, whose song “Sex and Candy” earned them a top hit in 1997. The album marks new territory for Lavie, whose experience as the frontman for a band – with no anonymity whatsoever – is quite limited (he recently wrote a piece for Sungenre largely about this experience). Overcoming the uphill fight to record and promote the record, it is a rewarding listen. Surprisingly well-rounded for an individual all too easily associated with drumming, there are dazzling aspects across the board contained within Habitual Eater. 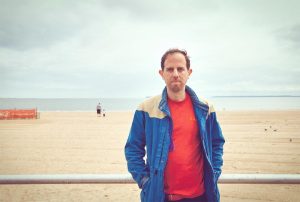 Essential tips and random photos from an experienced musician

The first track and lead single, “Last Bus”, is a grooving jam that features a driving bass not short on bounce and, expectedly, a percussion-centric instrumental arrangement. “I have no feeling in my upper jaw, I should have taken the last bus, you said you’d take me to the other side, I had a whisper of doubt” captures the gist of the song’s general movement, lyrically speaking, with the intensive “heads up, help on the way” being the framing instrument for the sentiment, with Lavie ruefully recognising his having missed his last shot at an exit. In spite of the general ambiguity in the album’s lyrics, there are such instances as this song’s “I should have taken you out”, suggesting this might importantly be at least in partial reference to a (potentially) romantic encounter. “Last Bus” is truly reminiscent of LCD Soundsystem’s sound, and particularly referential to their 2007 track “Watch The Tapes”.

“She’s No Pressure” is at least as eclectic as “Last Bus” with its mischievous mood (“their goal is high, their thrill is low, we still get in trouble, no matter where we go”). When Lavie sings “we ain’t walking in the same pace” and just leaves it there, he clearly means it – the song has the swagger of someone who’s felt pressure but elevated, now victoriously saying “she’s no pressure anymore”. The breakdown of the song is jazzy, punctuated by descending bass notes and some great keys which could easily be owing to a Rhodes.

Next, going into a song with such a title as “Mike Myers”, you can only expect so much, but when the simple but ingratiating guitar riff hits, the song just pulls the listener in. “I laid an egg on Mike Myers, there’s nothing I can get without fire” are ridiculous at face-value, but Lavie totally sells it with his precipitous energy and enthusiasm.

Just like its predecessor, “Where’s My Guy” has such a catchy-though-simple guitar riff that so justifiably perpetuates the song to almost five minutes; still, it’s so rewarding it doesn’t seem to last all that long. Heavily reliant on percussive elements to drive the song, “Where’s My Guy” does not offer much else to the listener. With its delivery, parallel to the infective guitar riff, this track may be as close as one comes to Rage Against The Machine while pertaining more to pop-punk than a heavier sound. The next song, “On My Hand”, while rocking a kickin’ beat, has a funkier feel to it, with some eccentric synth and key sounds, as well as a very 80s pop vocal treatment – it may remind listeners of Falco’s 1982 hit “Der Kommisar” or the sound of vintage Tears For Fears. Lavie sings “on my hand she wrote, together again” with some resonance. As it turns out, this juicy track might be crown jewel of the record. In “Right Wave”, Lavie wonders if he’s “riding on the right wave” – “there’s a broken spine hiding behind every truth” is this song’s appeal to the human experience, and together with the expression that “it’s as if one hand is waving me yes, and the other hand is slapping my face”, exhibits his frustration with mixed signals and the self-questioning that comes therefrom.

Not surprisingly, the instrumentation for “Right Wave” showcases percussions, and has little else to offer. “Relax Your Face” goes hard. Totally gratuitous ejaculations of “fuck that!” render this song an angry (“I’m mad, I’m mad”) punk-dance tirade. Power chord-heavy and up-tempo, this song offers instrumentally what it does lyrically. The song is, however, rather consistent with the album in its energy and domestic scope, and one must at least respect that it is what it set out to accomplish. The last song is “Wildstar”, which marks a huge change of pace for the album up to this point and is ironic in that regard considering its place as the last song on the record. The synths carry this song to a place of euphoric melancholy, as the song progresses “wild star, wild star, look outside the window, there’s blood in the sky”. The guitar tones are harsh and grating, pairing nicely with the soft, humming synths and neutral pacing.

Van Goose’s Shlomi Lavie definitely seems to prefer long jams to bite-sized songs, as the lyrical content is limited in volume and maybe scope but any song could just play on in repetition. The record is as busy and energetic and frivolous as rush hour traffic in Manhattan, even if the intrigue level dips as the album progresses. Without doubt, this album knows itself well – every song strikes the examiner as being exactly what it is supposed to be; there might not be a singular great work, but altogether Lavie accomplished what he set out to do, with respect to putting his mind to matter. The breakdown that closes out “She’s No Pressure” and the entirety of “On My Hand” are most likely the brightest moments of the album. Some rapacious guitar riffs mark the main attraction, despite Lavie’s drumming pedigree, which conjoin to make the album very worthwhile. If we needed any convincing, Shlomi Lavie is definitely not in hiding.