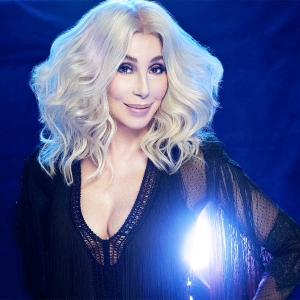 Cher (born Cherilyn Sarkisian; May 20, 1946) is an American singer, actress and television personality. Commonly referred to by the media as the Goddess of Pop, she has been described as embodying female autonomy in a male-dominated industry. Cher is known for her distinctive contralto singing voice and for having worked in numerous areas of entertainment, as well as adopting a variety of styles and appearances during her six-decade-long career.

Cher gained popularity in 1965 as one-half of the folk rock husband-wife duo Sonny & Cher after their song "I Got You Babe" reached number one on the American and British charts. By the end of 1967, they had sold 40 million records worldwide and had become, according to Time magazine, rock's "it" couple. She began her solo career simultaneously, releasing in 1966 her first million-seller song, "Bang Bang (My Baby Shot Me Down)". She became a television personality in the 1970s with her shows The Sonny & Cher Comedy Hour, watched by over 30 million viewers weekly during its three-year run, and Cher. She emerged as a fashion trendsetter by wearing elaborate outfits on her television shows.

While working on television, Cher established herself as a solo artist with the U.S. Billboard Hot 100 chart-topping singles "Gypsys, Tramps & Thieves", "Half-Breed", and "Dark Lady". After her divorce from Sonny Bono in 1975, she launched a comeback in 1979 with the disco album Take Me Home and earned $300,000 a week for her 1980–1982 concert residency in Las Vegas...

Los Angeles, CA, USA
Dance Pop Disco Rock Folk Rock
This page contains information from Wikipedia, the user-contributed encyclopedia, released under the Creative Commons Attribution-Share-Alike License 3.0. It may not have been checked by editors and as such may contain factual errors.
Dance Pop Disco Rock Folk Rock
Recent mentions of Cher
No posts found.
Reviews Interviews Soapbox Mixtapes
Help About Advertise Privacy Terms Write
We use cookies on our website to give you the most relevant experience by remembering your preferences and repeat visits. By clicking “Accept”, you consent to the use of all the cookies. Learn moreDo not sell my personal information
Cookie settingsACCEPT
Privacy & Cookies Policy