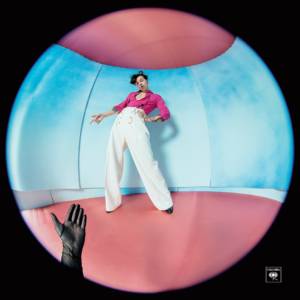 Harry Edward Styles (born 1 February 1994) is an English singer, songwriter, and actor. His musical career began in 2010 as a solo contestant on the British music competition series The X Factor. Following his elimination early on, he was brought back to join the boy band One Direction, which went on to become one of the best-selling boy bands of all time.

Styles released his self-titled debut solo album through Columbia Records in 2017. It debuted at number one in the UK and the US, and became one of the world's top-ten best-selling albums of the year. Its lead single, "Sign of the Times", topped the UK Singles Chart. He made his acting debut in Christopher Nolan's 2017 war film Dunkirk. Styles' second album, Fine Line (2019), debuted atop the US Billboard 200 with the biggest first-week sales by an English male artist in history, and was listed among Rolling Stone's "500 Greatest Albums of All Time" in 2020. Its fourth single, "Watermelon Sugar", topped the US Billboard Hot 100.

Throughout his career, Styles has earned several accolades, including a Brit Award, an American Music Award, two ARIA Music Awards, and a Billboard Music Award. Aside from music, he is also known for his flamboyant fashion, and is the first man to appear solo on the cover of Vogue magazine...

Read more at Wikipedia
Pink Floyd, The Rolling Stones, The Beatles, Fleetwood Mac, Harry Nilsson, Freddie Mercury, Elvis Presley, Paul McCartney, Wings
London, UK
PopBritpopSoft RockRock
This page contains information from Wikipedia, the user-contributed encyclopedia, released under the Creative Commons Attribution-Share-Alike License 3.0. It may not have been checked by editors and as such may contain factual errors.
Pop Britpop Soft Rock Rock
Recent mentions of Harry Styles
No posts found.
Reviews Interviews Soapbox Mixtapes
Help About Advertise Privacy Terms Write for us
Search or choose cover photo
View Apply Cancel
We use cookies on our website to give you the most relevant experience by remembering your preferences and repeat visits. By clicking “Accept”, you consent to the use of all the cookies. Learn moreDo not sell my personal information
Cookie settingsACCEPT
Privacy & Cookies Policy