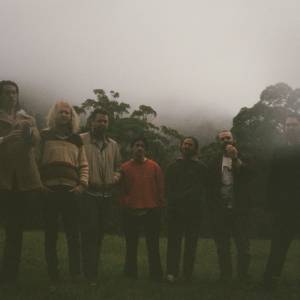 Shining Bird is an experimental pop band from the coastal town of Austinmer, NSW Australia.

Shining Bird formed in 2012, initially as a studio project, releasing Shade of the Sea EP followed by their debut album Leisure Coast a year later through Spunk Records. The album received widespread acclaim for its unique brand of Australian pop. It earned Album of the Week on ABC Radio National and received strong reviews from publications such as Rolling Stone and The Sydney Morning Herald.

The band’s second album Black Opal - produced by Russell Webster (keyboards), and mixed by Tim Whitten (The Go-Betweens, Hoodoo Gurus) - picked up FBi Radio's SMAC Awards for both Album of the Year and Song of the Year (x 2 for "Rivermouth" & "Helluva Lot". The record included a collaborative effort with legendary didgeridoo player Charlie McMahon (Midnight Oil, Gondwanaland), and received glowing responses across the board.

In 2016 the band completed a national album tour which took them to remote central Australia. After several sold out shows, The Bird was nominated for Best Live Act at the National Live Music Awards. Happy Mag said, 'Shining Bird are one of the finest band's in the country’.

The Bird has toured Australia extensively and supported acts such as; Kurt Vile, The Drones, Beach House, DMA’s and Father John Misty.

The band followed up Black Opal with the release of single “Who Are We” in May last year, to coincide with their show supporting Midnight Oil.

Now, the Bird are back with the first song and title track from their forthcoming third album Deadlands, to be released later this year via Spunk Records.