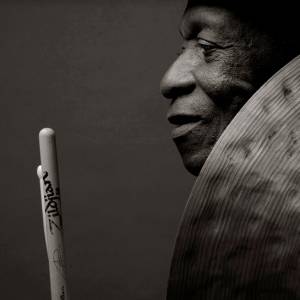 Tony Oladipo Allen (1940 in Lagos, Nigeria – April 30, 2020 in Paris, France) was a Nigerian drummer, composer, and songwriter who lived and worked in Paris, France. Allen was the drummer and musical director of Fela Kuti's band Africa '70 from 1968 to 1979, and was one of the primary co-founders of the genre of Afrobeat music. Fela once stated that, "without Tony Allen, there would be no Afrobeat." He had also been described by Brian Eno as "perhaps the greatest drummer who has ever lived." Allen died on April 30, 2020.

Allen's career and life story have been documented in his 2013 autobiography Tony Allen: Master Drummer of Afrobeat, co-written with author/musician Michael E. Veal, who previously wrote a comprehensive biography of Fela Kuti.

A self-taught musician, Allen began playing a drum kit at the age of 18, while working as an engineer for a Nigerian radio station. Allen was influenced by music his father listened to Jùjú, a popular Yoruba music from the 1940s, but also American jazz, and the growing highlife scene in Nigeria and Ghana. Allen worked hard to develop a unique voice on the drums, feverishly studying LPs and magazine articles by Max Roach and Art Blakey, but also revolutionary Ghanaian drummer Guy Warren (later known as Kofi Ghanaba – who developed a highly sought-after sound that mixed tribal Ghanaian drumming with bop – working with Dizzy Gillespie, Charlie Parker, Thelonious Monk, and Max Roach)...

Lagos, Nigeria
Afrobeat
This page contains information from Wikipedia, the user-contributed encyclopedia, released under the Creative Commons Attribution-Share-Alike License 3.0. It may not have been checked by editors and as such may contain factual errors.
Afro-Beat
Recent mentions of Tony Allen

Dave Graney and The MistLY