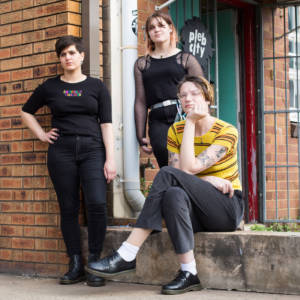 Bruise Pristine has been making an impact on the Sydney live music scene delivering intense live performances and sharing the stage with FLOSSY​, Baker’s Eddy​, Cry Club​, The Buoys​, Horror My Friend​ and most recently supporting UK’s ​Crywank​ on their farewell tour.

They released their debut EP Not Like You in 2017, and the first single ‘20mg’ received rotation on community radio stations including 2SER​, Triple R and 4ZZZ​, and was selected by FBi Radio​'s director Amelia Jenner for the station's new music playlist. ‘20mg’ and the EP title track ‘Not Like You’ also received rotation on Triple J Unearthed and overseas on California’s ​DKFM​.

Out of the atmosphere of political malaise and apathy, movements like #MeToo, the threat of the far-right, and political instability came 2018’s single ‘​The Way It Is’​. An admission of despair and anger, it is a commentary and a critique of power structures, gender rigidity and queerness. Following up the power of ‘The Way It Is’ was single ‘Tired Eyes’​ (released Jan 2020), a song about the dissonance that comes with having lots of ideas and ambitions but too little time or energy to see them through.