by The Short Fall 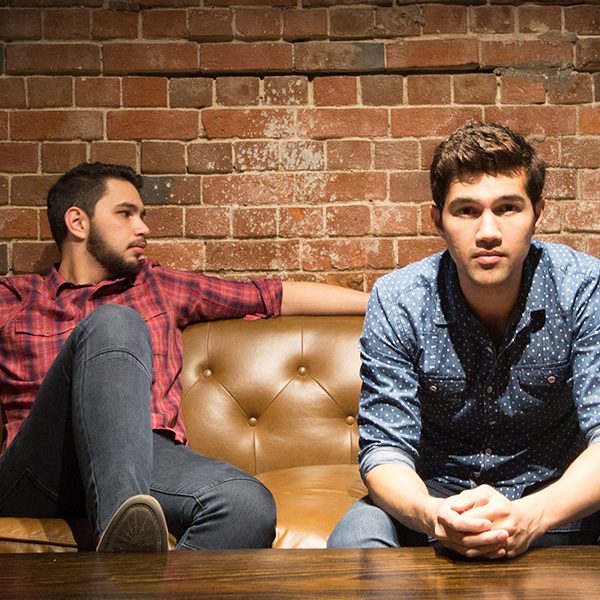 Brisbane duo The Short Fall are brothers in both blood and in music. Angelo and Ryan Conway channel influences such as Crowded House, Oasis and Jeff Buckley in the pursuit of their own unique blend of alternative indie rock. Their new single “Wait For Me” will be released on Friday 6th March.

Tell us a bit about your latest release.
“Wait For Me” is a departure from our earlier folk-rock roots, moving towards a more robust, energetic rock sound – basically just having fun in our songwriting process; something that’s alluded us for some time in recent years. We’re originally from Rockhampton in regional Queensland – Ryan moved to Brisbane in early 2018 to pursue a career as a guitar luthier. Ryan is just as comfortable building and repairing guitars as he is on stage playing them, so there was a time that it might have seemed like the band had simply played out its natural course as we hadn’t written a song together in two years. Inspiration arriving in the most unlikely form though – in a pair of high heels and a sequinned red dress. Angelo, still living in Rockhampton, was cast as the lead role in Kinky Boots in early 2019 playing Lola – a flamboyant drag queen. The musical was the first ever regional production of the show in Australia, and it played to a huge sold out season. The overwhelming audience response to the energy and creative freedom this larger than life character inhabited flicked a switch in Angelo’s songwriting. Replacing our melancholy singer-songwriter ballads are new songs imbued with positivity that reflect our energetic live shows with a full band. In short, just having more fun. Sorry for the long drawl – just sort of came out that way!

Do you prefer writing music with others or in isolation?
When working on song structure, composition, melody and instrumentation, we both love the collaborative aspect of that process. Being brothers, we’re brutally honest about whether we like or dislike each other’s ideas. I think that makes you less attached to the ideas you come up with so that you can be open to better ones, and also makes you fight or justify any part that you really believe in. I think that makes for better songs because we’re never just saying “that’ll do”. Maybe that’s why we don’t have a huge catalogue of songs to choose from when recording! (laughs) Lyrics is a different beast – it’s something we both struggle with – for us it’s mostly written in isolation and then refined once the main chunk of the songs has been written. Maybe because it’s a personal experience we’re drawing inspiration from.

What’s the best piece of advice you’ve ever received?
Had to think about this one for a while. Here’s some of the best advice we’ve received, paraphrased to our best ability…

1. On tackling nerves before a gig: Most people are afraid of what people will think if they mess up. 99.9% of the audience out there are on your side. They want to be entertained – they want you to do well. Take the pressure off yourself and have fun.

2. Even when you fuck up on stage, keep powering through. Most of the audience don’t know you messed up. As soon as you show a crack in your persona or performance the audience immediately knows and that facade is broken.

3. The best way to gain respect is to be the hardest worker in the room. You don’t need to tell them how good you are or what you can do if you can show them.

What is your favourite Beatles album?
We’ve actually had this discussion/argument many-a-time during roadtrips to gigs in the middle of nowhere. And we’d basically get nowhere except for agreeing on a top four! In terms of calibre of songs on an individual album, Help! (1965) is hard to argue with – “You’ve Got To Hide Your Love Away”, “You’re Going To Lose That Girl”, “Ticket To Ride”, the title track, and what’s the other one called? Oh yeah – “Yesterday”. The White Album (1968) is iconic – a little too much filler for our liking, but “Back In The U.S.S.R.” and “Helter Skelter” get massive votes from us. Sgt. Pepper’s… (1967) had something like 27 weeks at number one – don’t quote us on that – plus 32 million album sales. It’s probably the best psychedelic album ever and most inventive and creative album we’ve listened to. Please Please Me (1963) probably has to be the greatest debut album of all time, especially if you take into account that it was recorded in basically a day, for stuff-all budget.

Keith Moon or John Bonham?
We’re biased because we’re massive ‘Leppelin’ fans, so it’s John Bonham hands down for us. The bloke changed rock drumming forever. His flair, power and precision was the reason Led Zeppelin’s songs worked so well – the way he integrated his technique into the songs helped tighten up Jimmy’s riffs and brought the sound together. Rock. God.

Have you ever been starstruck?
Angelo shared a plane ride from London to Berlin with Noel Gallagher back in 2013. It was a late flight, maybe 10.30pm – we’d just gotten into London from Brisbane. I saw him lined up and wanted to just say I was a huge fan, so I worked up the courage. He was up the front of the plane in first class, so we walked past to get to our seat. We made eye contact and the look on his face clearly said “Fook off” so I totally chickened out and kept walking. I don’t regret it. I’m sure he’s a legend but he was intimidating as hell!

What keeps you awake at night?
Angelo says teething toddlers, man! Fatherhood is awesome but sleep deprivation is brutal!

What’s next for you?
Our new single, “Wait For Me” will be released on Friday March 6 on all digital platforms. We’re supporting Daryl Braithwaite on Great Keppel Island on the 14th March – the opportunity to launch our single while supporting an Aussie music legend on the island where his iconic “The Horses” music video was filmed, to what will effectively be our home crowd is almost too good to be true. Any time you get to play on Great Keppel Island is special – it’s one of the most beautiful places in the world. We’re so lucky this event has coincided with the launch of our new single as well. “The Horses” is basically the unofficial anthem in regional Queensland pubs so it’s safe to say it’s going to be absolutely packed.

If you could collaborate with any artist in any medium, who would it be and what would you create?
Can we choose two? Or is that cheating? Dave Grohl on drums and Paul McCartney on bass, jamming out a live session of Beatles songs.