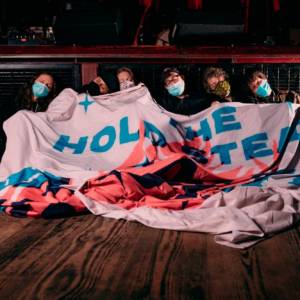 American culture is full of people who think they’re Bruce Springsteen. Every dive bar and karaoke night has one, and sometimes those artists do a pretty good job at their imitations. Ever since Springsteen’s major crossover with Born in the U.S.A. (1984), there have been countless songwriters who either saw themselves as the next torch bearer for his specific brand of Americana or saw themselves as someone who belongs in one of his songs.

Most of the time those artists really had no business watering down Springsteen’s heart on the sleeve persona, whether it be someone arguably more successful like Jon Bon Jovi, or someone whose voice is a little more conflicted like Brandon Flowers.

But sometimes artists pick up on the nuance behind those classic songs, taking the label “heartland rock” and spinning it into something brand new. Adam Granduciel and The War On Drugs are one, having arguably challenged the very notion of “Springsteenism”, creating a sound that evokes the grandiosity and beauty of their influences without the innate pitfalls. And then there’s The Hold Steady.

Craig Finn and company have been steadily releasing albums as The Hold Steady since 2004 and those first few albums are genuine masterpieces. The band, as Blender noted back in 2005, sounds like “The best bar band in the world.” A notion that offers the key to understanding the band’s ultra-specific brand of rock ‘n’ roll. Their arrangements may feature the rollicking piano and chugging guitars one might expect from a middle of nowhere watering hole, but that serves only as a vehicle for Finn’s songwriting.

Those lyrics are what keep fans invested in each new album, and even as the band members turn towards 50 and their albums grow less consistent, it’s what remains captivating. Finn builds on Springsteen’s idea of America: a place where stories happen, but are seldom told, similarly finding endlessly entertaining characters that all seem to find themselves in the same hot water. In Finn’s America, everybody is at a party or a bar, every girl is a prostitute, a cocktail waitress, or both and every guy is named Charlemagne.

For better or worse, The Hold Steady’s sound has remained remarkably unchanged over the years, with the biggest shifts coming from a couple of personnel changes. But even besides that, there has been a noted degradation in the band’s sound since their critical zenith in the mid-2000s. Each album following Boys and Girls in America (2006) has sounded a little less cohesive and a little less memorable.

After their most recent album, 2019’s disappointing Thrashing Thru The Passion, the band seemed lost. That record was disjointed and confused, a record that showed little reason to stand amongst the rest of the band’s discography, other than as the glorified compilation it really was.

Compared to that dismal precursor, Open Door Policy, the band’s eighth album, marks a pleasant return to form for the band. Maybe it’s their rapidly approaching hill peak but their newest effort smartly avoids much of the bar band flair in favour of a more subdued and piano-heavy rock album.

“The Feelers”, an understated opener, best represents this change, letting one of Finn’s characteristically dense word play and rhyme scheme heavy narratives stretch over a surprisingly fresh arrangement. A formula the band has worked through countless times, but one that never feels tired when done correctly.

“Unpleasant Breakfast” is another successful foray into some relatively new territory, featuring some additional musicians contributing a notable horn section from Stuart Bogie and Jordan McLean and some infectious “wooh”s from Cassandra Jenkins and Annie Nero. But that pleasantly different change comes along with something unfortunately more familiar.

“Riptown” may be the weakest point on Open Door Policy, a song that sounds like one of the B-sides on Thrashing Thru The Passion. In this case Finn’s narrative sounds hackneyed, never losing his unwavering wit but lacking the indelible characters he has built up until this point. The musicians don’t help too much either, providing a saccharine backing that doesn’t contrast well with Finn’s lyrics. While not the worst track the band has written, bonus track “Parade Days” holds a lot more weight than this album cut.

But at this point in The Hold Steady’s career, the band has achieved exactly what they needed – a necessary rebuttal to their shortcomings. Finn is conceptually strong as always, weaving these stories together to meld a greater work of art, and the band in turn works to create some genuinely new sounds for themselves. While the band may never return to the raw disorder of their earlier work and Finn may not be at the highest highs he once operated at, both have plenty more to say before The Hold Steady calls it quits.