Recently, something unexpected has been going on in Melbourne. The foreign, American genre of neo-soul and all of its psychedelic and jazzy tendencies has been picked up by the locals and built upon to the point of being something a little different – think less R&B, more future funk. Things like this happen; music can be adopted and relocated like a plant, no one knowing where its roots are going to take. What’s surprising is that the seemingly isolated trend in Melbourne grew to become especially popular in the UK. It wasn’t long before a London label, Rhythm Section International, began to notice and eventually signed the most promising talent from the burgeoning scene.

30/70 is not the biggest or the most important band to be signed to Rhythm Section, but they are the first proper band. That gives them something most of the other artists lack, where established label mates like Hiatus Kaiyote draw equal inspiration from UK club beats, 30/70Badu-led Soulquarians jam session. On their best tracks here, that comparison is hard to ignore. 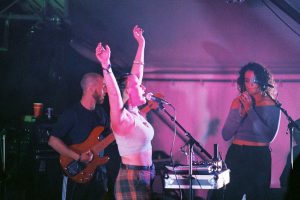 As a collective, they have steadily grown throughout their career, with a constantly shifting set of players; the five mainstays seem to revolve around Allysha Joy, Ziggy Zeitgeist, Henry Hicks, Tom Mansfield & Jarrod Chase. As their debut Cold Radish Coma (2015) caught the attention of the Melbourne press, they began to develop a reputation around their home town, but it wasn’t until 2017’s Elevate that they became recognisable throughout Australia. Now with this year’s Fluid Motion, they have a world tour under their belt and are making a case for themselves outside of both Melbourne and their adopted London.

Fluid Motion is not dissimilar enough to dissuade longterm fans but on the opening track, “Brunswick Hustle”, the band demonstrates just how far they’ve come, contributing a fully realised thumping introduction and making a case for the band they could be. But 30/70 has never been about colossal dance jams, or even the funkiness of “Brunswick Hustle”, 30/70 is focused on the aftermath.

As the opener fades out and “Addicted” begins, you realise the party’s over, and while everyone’s coming down and waiting for the sun to come up, your wits are finally starting to come back to you. “Addicted” is lucid, representative of the band as a whole, and that feeling of oncoming sobriety. Sax runs come in and out, Joy’s singing is expressive yet non-confrontational and the song meanders along in a way that evokes effortlessness instead of listlessness.

The mood continues with “Fluid Motion”, that track having some interesting percussive and great little vocal affectations but eventually bringing the vibe down to an even mellower place, even when the tempo keeps building. Similarly, the restless “N.Y.P.” begins with a great Frank Ocean-esque break down before building into an anxiety-laced crescendo. It’s these moments where the band explores their esoteric jams and keeps everything fairly loose. Elsewhere on the album, 30/70 tries to craft big poppy singles to relatively diminishing returns. “Tempted” and “Backfoot” are repetitious and catchy but seem limp when accompanied by their analogue instrumental arrangements, and confusing when considering their club influenced label mates.

The two shortest songs here, “Reprise” and “Echoplex” offer two competing palette cleansers: while “Reprise” feels more like an unneeded extra, something that could easily have been cut off the 13 track album, “Echoplex” uses its place as a vocal-less interlude to let the band shine and give more resonance to Joy’s voice when it chimes back in on “Backfoot”. The best songs on Fluid Motion however, come in at the end. “Crystal Hills” is a breakbeat-inspired instrumental that is propulsive enough to carry two and a half minutes of minimal airport-running music. “Push and Pull” and “Flowers” offer the greatest artistic leap forward for the collective, providing tight memorable hooks that more than any other song here, necessitate repeated listens.

Talent is no doubt present on Fluid Motion, in fact it can be frustratingly hard to ignore. Maybe it’s the nature of a collective, a feeling of too many cooks that causes a project like this to feel somewhat unrestrained. Maybe that’s the point, either way, although their third outing is undoubtedly their strongest yet, the experiments still yield a few too many misses. Those moments when the entire band is on the same wavelength and the songs feel inhumanely precise, are hard to do, but on Fluid Motion, 30/70 has figured it out. If they can keep that momentum going into their fourth album there will be a lot to look forward to.