The compilation of Animal Collective’s Ballet Slippers, a sort of composite live setlist paying homage to the band’s legendary 2009 tour in support of their seminal January 2009 release Merriweather Post Pavillion, is indeed a big moment for the band now ten years later. The undefinable and acclaimed group, comprised of Avey Tare (David Portner), Panda Bear (Noah Lennox), Deakin (Josh Dibb), and Geologist (Brian Weitz), celebrate the ten-year anniversary of the tour with a setlist that represents the band’s body of work between 2000-2009, with special emphasis on Merriweather Post Pavillion. It is definitely a trip, and for the dedicated fan of Animal Collective, a very nostalgic one. 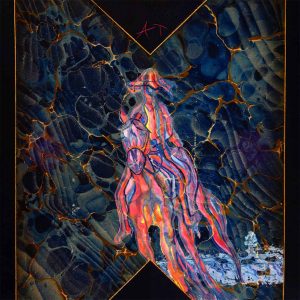 “In The Flowers” (June 2, 2009 Boulder, CO) kicks off the “set” with its characteristic ambient, pulsing gradual commencement. This particular recording was also the initial song played by the band at its respective show. This not only seems historically appropriate, but additionally important in the sense that the recording carries with it a mood of pregnancy and anticipation which, naturally, promise the pursuing concert. Given the self-enchantedness of “In The Flowers” as a song, lyrically and sonically, it sets the scene perfectly. “In The Flowers” is followed by the classic “Who Could Win A Rabbit”, off the band’s 2004 Sung Tongs record, assiduously plucked from the June 9, 2009 Fort Lauderdale, FL concert. The song’s intensity and avant garde ingenuity energises this composite recreation. The erotic jaunt “Summertime Clothes” (June 9, 2009 Fort Lauderdale, FL) carries the energy, especially at the behest of an enthusiastic Avey Tare crying “with the sun, you know I wanna get it”. Merriweather Post Pavillion is already well-represented three tracks in.

“Bleed” (May 30, 2009 Las Vegas, NV) is the fourth song presented on Ballet Slippers, and substantially slows the pace and quiets the mood established by the first three tracks. “Bleed” was also officially released as part of Animal Collective’s 2009 EP Fall Be Kind, in November of that year, marking it as a new, unestablished piece (disco-graphically speaking), for live performance. The next song up is “Guys Eyes”, the seventh track off of Merriweather Post Pavillion, which is culled from the Fort Lauderdale show in which it appeared sixth. As is a prevalent issue with fielding a concert among any ambient, sonically-sophisticated band that plays subtly with textures on both the high and low ends, the integrity of the sound is a bit compromised and does not emanate with the same power. However, this recording of “Guys Eyes” seems to come rather close to satisfying the studio recording.

One of the best elements of the records is the ubiquitous crowd noises – when “No More Runnin’” (May 29, 2009 Los Angeles, CA) hits, the crowd erupts. The Los Angeles performance’s only representative on Ballet Slippers, one gets the feeling it was selected for the special electric atmosphere it seems to have; the crowd is totally with it. The song quietly recedes into radio silence – a moment which reminds the listener that he or she is not listening to a contiguous live set – only to be startlingly broken by the obtrusive first note of a 20-minute, trebly “Lablakely Dress/Fireworks” (June 9, 2009 Fort Lauderdale, FL) jam. “Daily Routine” (May 30, 2009 Las Vegas, NV) and “Brothersport” (June 2, 2009 Boulder, CO) close out the record with continued energy.

To the involved fan of Animal Collective, Ballet Slippers will absolutely constitute a great collection of live songs from the group’s fabled 2009 tour. The record will probably do little to win more fans on account of its being a characteristically strange, alienistic collection of songs, unless the well-carried dynamism of the live performances does some convincing. The recordings are clear and rather nuanced, the mixing is well-executed, and the live feel is, for the most part, captured by the tracking insofar as the transitions between songs tend to be fluid and dynamic.

The hardcore fan will surely feel the nostalgia of Merriweather Post Pavillion ten years later – especially if the live shows were attended. The strength of Ballet Slippers seems to rest in its faithful adherence to the sound and flow typical of a 2009 Animal Collective show, as well as in its curatorial savvy. Speaking to the latter, there are four live performances represented (Los Angeles May 29, Las Vegas May 30, Boulder June 2, Fort Lauderdale June 9) among a wealth of shows played during the 2009 tour; it might be surmised the quality of available audio could have been a significant factor in curation. Even ten years removed, we can say Animal Collective had a remarkable decade from 2000-2009 – a decade well celebrated and summarised by Ballet Slippers.