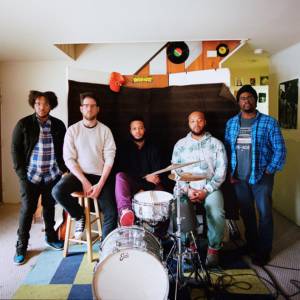 Over the course of twelve years, Richmond, Virginia five-piece Butcher Brown have carved out a steady career anchored in jazz – successfully infusing it with everything from hip-hop, funk, neo-soul and rock. Over time, they have shared the stage and have won the fandom of modern jazz titans such as Kamasi Washington and Christian Scott aTunde Adjuah. #KingButch attempts to position itself amongst a lineage of revolutionary jazz fusions releases with cover art designed by Lou Beach, the same artist responsible for the cover of Weather Report’s 1977 classic Heavy Weather.

Under the guidance of producer Chris Dunn, the band brought in live recordings to serve as the skeleton for the tracks on this album. The band’s goal behind this was to capture a sense of rawness that is sometimes lost in the studio. Intro track “Fonkadelica” makes a strong initial statement with a pronounced funk groove nesting soulful harmonies. Drummer Corey Fonville makes an impact with forceful snare work. The title track really kicks things into gear with Marcus “Tennishu” Tenney showcasing his MC abilities while supported by the free-flowing comping from guitarist Morgan Burrs. Tenney also raps on the more samba-inspired standout track “Gum In My Mouth”.

On the next cut “Broad Rock”, Tenney puts down the microphone and picks up his trumpet, playing with colourful impression. The slow jam conjures an infectious atmosphere. Taking heavy cues from circa-1976 Herbie Hancock, the jazz-funk oriented “Cabbage (DFC)” demonstrates the technical prowess of bassist Andrew Randazzo and keyboardist DJ Harrison. The interplay amongst the rhythm section amplifies the flavourful horn melodies on top.

“Frontline” is the closest traditional cut, but tastefully modernised. Modal horn runs fit cozily over the ethereal keyboard harmonies from Harrison. “1992” takes on more of a post-disco approach; Fonville’s liberal use of cowbell should not go unmentioned.

A cover of Mtume’s 1978 track “Love Lock” gives some welcome variation to the track listing with this sunny ballad. Burrs and Harrison trade off bright, congenial leads before erupting into a searing guitar solo. “Tidal Wave” also digs into the band’s vast influences – a cover of the Ronnie Laws’ classic mixed with strong nods to Black Moon’s “Who Got Da Props” (1993), a song which sampled the Laws original.

Fly Anakin, a fellow Richmond-born rapper, is brought on as a guest on “For The City”. Fly Anakin’s verses are held up by feathery, spiral keys. “IDK” is a satisfying conclusion to the album – a multi-part, six-minute journey constructed with precision.

For their eighth album, Butcher Brown settled in the studio for two weeks, which to this point is the longest time they have spent on a single recording project. The project is a meticulously mixed, energetically performed, and fluidly cohesive package of jazz-funk hybrids. It sounds like a live band, but one that is simultaneously embracing every weapon a studio has to offer them.