It appears ambiguity is an attitude disappearing from contemporary society. Where science dictates decisions and politicians evoke unwavering opinions, there’s little room to indulge in the unknown. Auður Zoëga’s first full-length LP as Comfort Creature goes against this grain in favour of uncertainty. Through haunting experimental-indie compositions that delicately straddle serenity and strife, the fulfilling listen never relinquishes its sonic state of limbo.

Melbourne-based and Icelandic-born, Zoëga twists folk, experimental, ambient and indie styles into one pulsating being. A singer-songwriter-composer, modulated feedback via no-input mixing clashes against organic arrangements of piano and strings. The resulting soundscape conveys anxiety and unrest in a relentless melancholy made accessible by Zoëga’s angelic vocals. Comfort Creature is a confronting tour whose strength comes from finding resolutions amid darkness.

“Swimmer” opens with the conflict of soothing vocals against forlorn guitar. Glitchy garnishes mirroring irritated cicadas seep into the second verse before bass builds a backbone that strengthens the sense of dread. The final note of the bass progression abates all preceding tension, engendering an emotive ambivalence. Zoëga’s incantations to “bury yourself, deep under covers” is equally ambiguous being either a warning or epithet regarding one’s dark desires.

The first single from the record, “Pyramid Room Exit”, marries rhythmic snappy samples with shy plucks of harp. As these elements slink from the silence, a sequenced synth’s entry creates nuanced melodies. Much aligned with the concept of thriving in one’s world of introversion, Zoëga offers an inspired call to introverted arms; “Its radiant light, fills me up, sucks me in, leads me on and makes me strong”.

Defined piano stamps an authority over “Better State”. Conniving guitar soundtracks the self-doubt in extricating oneself from their safe space; “It’s too hot to go outside, maybe it will be worth it”. The track’s tension does resolve, albeit into dark spaces, creating perpetual unease that’s accessibly confronting. The chorus hits hardest through a defeated resignation in revere; “Another night walk, it’ll be dark soon, a good one though, the kind I’d crawl into”. 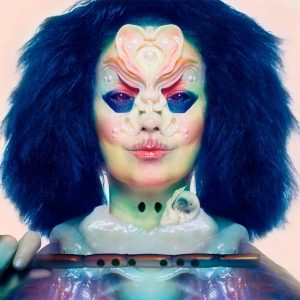 “Numbers” opens with a more approachable melody before bass notes syncopate rhythmically. A restrained pre-chorus isolates keys and voice before reversed sampling, white noise and treated strings populate the vivid arrangement that ushers in fantastical Björk-like vocals. Glistening with white light, these melodies shine over the composition. Reverting to the discord of the introductory two-chord progression only enforces this moment of levity as Zoëga laments, “I have waited the longest day”.

Male/pitch shifted vocals on “Op En” run along an uplifting melody. Ambient rattles of knick-knacks pervade the background before the clarity of Zoëga’s singular voice takes hold. Droning tense strings intrude to heighten the hymn where isolated vocals amid silence stun. The introduction of guitar plucks that impart the sense of a western saloon scene add unrest to the closing hypnotic coo’s.

Review: Mitski – Be The Cowboy

There’s a strong sense of Mitski and St Vincent to Zoëga’s stylings on “Glow”. Backed by a music box, there’s an unnerving initial creepiness. Rolling guitar arpeggiations ultimately fuse fantastically with phased reversed samples before melding with the introductory keys for a stirring passage that feels smooth and strident. It’s one of the few songs on the record to bare its gnashed teeth through fuzzed guitar and stark moral analogies; “Devil’s on the landing pad, burning as I shook his hand, cast your mind the highest place, we go dance around the falling straight bellow”. This final solo erupts with the vigour it teases, succumbing to a dark side.

“Intention” is an eight-minute expedition that builds on its foundations of peaceful harmonies and soothing strums imbibed with portamento. Delicate violins caress further with pleasing melodies akin to Björk’s “Unravel”. Offering a calming affair allowing you to drift, drums and guitar unshackle with ambition that soars. Strings re-enter to fuse antique with contemporary that only furthers the heartfelt drama of the piece; “And I know this won’t last, until I see you next, and I know this is going to be my final test”. The song’s heavy with the burden of a sombre acceptance of finality and empathy.

The shortest tune on the album, “Vicar”, follows up with white noise looming behind vocals like a mechanistic monster ready to pounce. Electronic organs poke in and out to enforce chords and imbue a gothic quality to the track.

Closer “Zen” offers an animated energy via another populated arrangement that never feels overcrowded. Offering the most satisfying releases through its vocals, strings and keys, it’s a truly touching conclusion and reward for persisting through harder moments. Zoëga doesn’t completely abandon the darkness, however, offering a sense of a damaged resolution in pensive chords and a scarred story; “Buried in the sand, I reclaim my crown”. Whilst initially a symbolic attainment of serenity, the closing distortions and looming piano that envelop everything implies the song’s namesake is a state of false hope.

Comfort Creature’s debut is a powerful collection of deep compositions that enlightens the listener on their deepest burdens. Whilst exhaustive in its persistence to withhold effortless resolutions in favour of tension and ambivalence, the record gains fulfilment from its scarce moments of revelation and harmony. Silence is used to arrest as much as angelic vocals are to elevate on a record where responsibility lays on the listener to delve deeper into their own demons.