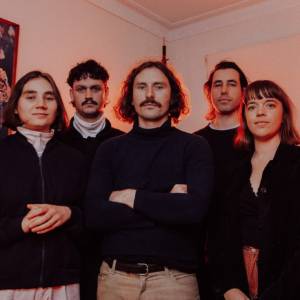 It should come as no surprise that a band named Eggy would be making music that leans on the lighter side of life. The Melbourne band spin strange and surreal songs suffused with freedom and expressiveness. Bravo! is their first full-length album. Mixed and mastered by Mikey Young of Eddy Current Suppression Ring fame, it expands on the wonky stylings of the band’s previous EP Billy (2019). The freeform spirit has remained the same but the band have managed to maintain it over a much longer length.

The tracks on Bravo! might be downright odd but it’s all passed off with an innate coolness. Eggy experiment and generally mess around on the record when they feel like it; their pop culture references talk of everything from iconic sci-fi AI to children’s hand games. It’s when the band commit to surreal sonic visions that the record truly shines. “Round Table” is touched by ambitious improvisation, including swerving and jarring chord changes that never harm the melodic rhythm; it even includes vocals doubling as Minecraft commentary.

“Johnny Whoop” – named after the children’s hand game of the same name – sounds precisely like something Cate le Bon (a noted influence) would dream up. It’s a deeply irreverent and clatteringly strange entry into the record (one has to note the irony of naming a track marked by such purposeful chaotic rhythm after a game designed to improve coordination). “HAL 9000” may be named after the murderous AI system from Stanley Kubrick’s masterful 2001: A Space Odyssey but the song’s sound bears no resemblance to HAL’s cold austereness – the rhythm is too warm and whimsical for that to happen.

With such a freeform record, there are obvious lesser pieces. “Another Day In Paradise” is a mess of rough instrumentation, the collated sounds of the recording studio and their process – but it stretches too long. “The Nest” contains what sounds like a meagre narrative of a bird’s journey above the city, while the vocals are more incoherent on a track like “IN”, where pounding garage rock fuzz dominates on the climbing tune. “Your End” is as downtempo as they go, the instrumentation reduced as a soft and contemplative vocal dovetails nicely with mechanical and jittery synths.

There are moments when they manage to marry a sense of seriousness with all the fun. “HAL 9000” examines the difficulties in striking a balance between engaging with important subjects in the internet age when so many online distractions can kill hours of the day instantly (“Pop culture’s killing me” is the song’s wearily cried refrain). The lyrics overhead on “Absentia” reflect similarly on the tension that exists between staying engaged politically and being overwhelmed by youthful cynicism (“I will vote in absentia, sipping frozen margaritas”). It’s also a delightfully balanced song, full of jagged post-punk guitars that come skidding into view, forging a destructive and singular path.

This is what their music is: it’s the sound of millennials struggling in a new era of austerity, plagued by political inefficiency, unprecedented pandemics and economic instability, when all they really want to be doing is experimenting in the studio with their friends from the music community. In this way, Eggy are reminiscent of a new wave of youthful bands who are post-genre and who emphasise freedom and playfulness: Glasgow’s Kaputt and Shopping do a similar thing, while a group such as Black Country, New Road do it while sliding into darker territory.

“25” is then a buoyant and jubilant closer, held up by bouncing synths and swirling sax, the band going out as they first entered, in a playful and effervescent mood.

Bravo! was always a presumptuous name for a debut full-length – not to mention the loud exclamation point – but Eggy’s endeavours for the most part earn the title. Their absurdist, unpolished pop is refreshing, charismatic, chaotic and interesting.