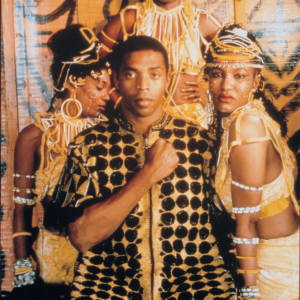 Nigerian band leader Fela Kuti essentially created Afrobeat back in the early 1970s, and in the process popularised a genre of music that would soon be championed by his home country. His career would be defined by turmoil, with Kuti becoming increasingly admired while consistently protesting the military juntas across sub-Saharan Africa. Arrested over 200 times, His determination as a trailblazing musician and political crusader made him world famous. His son Femi Kuti, growing up in his father’s shadow, learned to play the saxophone at 15 and would eventually accompany his father on tour. Femi’s career, although he was talented in his own right, has always been defined by his fathers’, in the same way as say, Arlo Guthrie.

Femi eventually developed his own following, partially influenced by his inescapable resemblance to his father and partially as a living continuation of the Afrobeat pulse Fela created. Femi would become a festival staple for token world music on most continents in the 2000s and while Fela developed a near-legendary persona, his son remained tangibly immediate.

Femi’s son, Made Kuti on the other hand, was similarly brought up on tour, learning to play bass and saxophone with his father’s band Positive Force. In 2020, while both father and son were working on their respective albums, they decided to release them in a single package: Legacy +. Made’s entry, For(e)ward, features him performing every instrument, a talent he brought to Stop The Hate, where he assists with bass, percussion and alto sax.

But Femi is never outshined on his own album. While the sound of father and son performing together is endearing, Femi remains the star, sprinkling each track with the trademark Kuti politics and ensuring the album retains the raucous energy listeners expect. The album, much like every album Femi has produced, is fixated on groove first, attempting to contrast rhythm and spontaneity with deep social injustice. Also as with most Femi albums, the lyrics take a backseat to the dancing. While each track radiates a euphoric vibrancy in its composition, those lyrics remain one dimensional, especially when compared to Fela’s work.

That comparison is hard to avoid when the music is as derivative as it is. Femi is no doubt a talented vessel for his father’s remembrance – more so than say, Dweezil Zappa, but lyrical nuance seems an afterthought. In that way, it doesn’t matter too much. What you hear when you listen to Stop The Hate is an Afrobeat album, one that puts music first, drizzling enough vague anguish and objection for the listener to rally behind the cause but not enough to distinguish this album among the rest in Femi’s career. Instead, what does shine through is the vivacity of the performances, something that seems even more important knowing the relationship between father, son and grandfather.

That strength comes in the arrangements. On title track “Stop The Hate”, Femi’s production remains clean and sophisticated, featuring a layered instrumental arrangement and a focus on instrumental interplay first. Femi’s vocals remain understated and generally nondescript, until the song builds towards a cathartic confrontation. Even though Femi never quite sells “Stop The Hate” lyrically, he manages to ring enough power and passion from his vocals to evoke pathos from his clichés.

Similarly, “Na Bigmanism Spoil Government” forgoes the initial onslaught of Femi’s exposé in favour of building a memorable setting for his band. The result is a well-positioned push towards excess, highlighting enough flourishes and breakdowns to keep the listener invested, leaving the vocals to act effectively as a stabilising instrument instead of the guiding force behind any improvisation. This focus on musicianship instead of messaging works best when it feels natural and unprovoked. On a track like “Land Grab” the music serves to highlight and accentuate the importance of the issue itself. With lyrics as repetitive as they are here, without the support of an interesting backup, the brief track falls apart, feeling even more like filler than it should.

Stop The Hate is a success – not as revolutionary as Fela’s greatest work, and not as fresh and defining as Femi’s own 1995 debut – but nevertheless another solid release from a reliable stalwart. Pairing the album with Made’s For(e)word helps the album conceptually as well, giving a greater understanding to the two primary musicians at work and thus a greater reason for existing. After all, Legacy + is the story of two musicians and for once Femi’s work is in support of his son, instead of the other way around.