The male singer/songwriter has, for the longest time, been a worn trope. A succession of beige examples in the preceding decade led to the title becoming a weighty one, a poisoned position. When listening to Jesse Madigan’s album Nothing Better Than A Journey To You, there are clear troubadour postmarks, as if Madigan is travailing the well-beaten path of his forebears: the lovelorn lyricism; the wispy and self-serious vocal delivery. There is enough promise contained in the record, though, to be hopeful for Madigan finding growing success down the road. 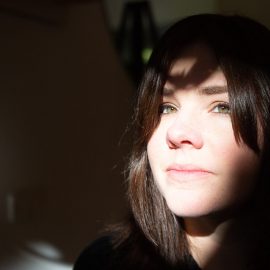 Performing and writing in several different projects, this debut solo album marks his firm commitment to his own venture. The songs were already previously released by the musician in 2019 but now under the guidance of Spunk Records, Madigan is re-releasing them now. The rawer recordings were mixed and mastered with the aid of J Walker (Paul Kelly, Tiny Ruins) to provide a fuller sound for his label debut.

The album explores seasons and transitions, inspired by the beautiful landscapes of the New South Wales coast, in particular Newcastle, where Jesse is based – a place where its natural beauty and upcoming music scene inspires a raw and honest sound. There is an easy generality to the album’s sense of place and time, though. From summer (“Under A Summer Night’s Sky”) to winter (“Winter, In Dreams”), his pleasing music drifts through these seasonal changes and allows the listener to imagine their true location. Indeed, small touches give pause as to whether Madigan was intending this. On “Under A Summer Night’s Sky” he sings “so that January night”; that same month is also referred to as being in the wrong season in the song title “January In Spring”. It’s all misleading and curious and general – we are everywhere with Madigan and we are nowhere.

“Under A Summer Night’s Sky” was the first single from the album and it also leads us into the album with a grandiose string opening which gives way to Madigan’s imminently agreeable vocal. His voice is arresting, possessing that same softly-spoken quality of so many of his predecessors. Each word emanates with a considered quality; he always sounds deep in ponderous thought on each song. “Trees” comes in faster, Madigan’s acoustic guitar pounding incessantly. There are frequent tempo changes throughout – perhaps a sign of a youthful lack of self-assurance – with Madigan sometimes being guilty of relinquishing control of the song, slowing things down to barely a whisper, disrupting the listener and the album’s flow. The folk of “Winter, In Dreams” does this, likewise “Driftin’ Away”, with his guitar quietly drifting behind his melancholic vocal and sounding sincerely like an early Bon Iver piece.

Most of the album is pitched at a low acoustic level with one noticeable departure: “Salt” is as poppy as Madigan is willing to go, its woozy rhythm aligning him closer to those ubiquitous Mac DeMarco bedroom-pop acolytes than he’d probably like to be. The main specified sense of place Madigan allows follows on “Angourie Skies” – a reference to that iconic Australian surfing spot – and it takes little effort to imagine watching those waves roll in while listening to this lilting ballad.

“Ta Ville Est Vide Sans Toi” (translated to “Your City Is Empty Without You”) – is resplendent with a haunting piano entrance, and as Madigan plaintively harmonises with a female singer, it’s hard not to wonder whether the French title is purely personal or merely pretentious. “January In Spring” is another piano number, this time with more bounce and life to it, the song bursting into life at its midpoint with a wonderfully sunny groove. It’s a great example of what can happen when Madigan commits to his route and sticks to it. “Dancing” closes the album out with Madigan’s most involving and intriguing instrumentation, his guitar twisting and weaving in myriad ways.

Like that coastal trip you went on once and didn’t fully take in the landscape before you, this album has the tendency to float by upon first listen; it’s on the second visit where the songs sound richer and more realised. As Madigan sings, “Spring will come soon and wash all your worries away” – constantly there is a hopefulness in the record. He is young and time is on his side.

For everything about Jesse Madigan and his music is in transition. He is the quintessential singer/songwriter discovering his own trajectory; his album title speaks of a journey and the music held within it is constantly moving, through the changing seasons. Madigan has found himself at an excellent new home at Spunk Records, and their formidable roster contains enough musical antecedents (Emma Russack, Alasdair Roberts, The Middle East) to inspire hope for Madigan’s future.