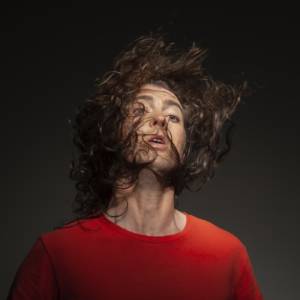 Despite initially gaining recognition as a prolific drummer, Nick Martyn’s solo project Las Mar paints a portrait of an artist – vocalist, composer, producer and all. Don’t Read Everything You Believe is the follow up to Las Mar’s 2016 debut, Euphemist. Amidst a sound that is hard to pin down with its world music, electronic, and funk elements along with many others, this album achieves a sense of musical integrity in the atmosphere it creates.

Martyn’s live performances, some of which are available online, show an artist in his full form, going beyond just performing to instead create. Drums, synthesisers, and vocals are the main tools with which Las Mar builds a live experience for his audiences which have spanned across Australia, Japan and Europe. In listening to this album, there is a sense that it is yearning for the stage.

The album artwork – fragmented, abstract – prepares the listener for a musical experience where the appeal is the opposite to that of pop music, which is rewarding in its ability to be understood and felt immediately. Here, where vocals and lyrics are used sparingly and strategically, the appeal is in deciphering the musical story.

“Great Ocean Tone” succeeds as an opener in that it involves Martyn painting a portrait of himself as a musician. Through this track, new listeners come to understand that a Las Mar track builds, layer by layer. This primes the listener to be able to seek out the detailed layers in each of the following songs. With the absence of lyrics, the voice is used purely as a supporting instrument here. The track washes over you to welcome you in, befitting its title.

The album quickly takes an upbeat turn in “Something That I Know”. The funky bass and drum line are the foundation of this track. They never leave, as synthesisers and an array of percussive elements enter and Martyn sings; “Something that I know, but didn’t wanna show.” On the next track, “Sif Ribi”, the guitar comes in with a sharpness that makes it the funkiest track so far. A quarter of the way through the song however, this guitar evolves into a psychedelic sound which envelops the listener.

In “Albino Rhino”, Martyn’s element of repetition which was hypnotising when used with percussive elements or guitar plucking becomes perhaps a bit too harsh when used with electronic synths. However this is redeemed in the next track “Weekend Repair”, which blends world music-infused drums so seamlessly with the bass they seem to be as one. The vocals are more forthcoming here, with Martyn delivering on the album title’s promise of casting a skeptical eye on the world around us; “You can’t deny how the world is kind of strange but hey, I’m no servant of theirs, I just push them to the side.”

“Krdtay” acts as an interlude before the album shifts direction. Being relatively stripped back compared to the complexity of the past few tracks, this track allows the listener to hone in on Martyn’s impeccable drumming skills which have made him a figure in Australian live music.

In “Killbot Quartz”, Martyn leans into his electronic influences. This track is refreshing and certainly stands in contrast to the album so far. “I No Say” continues this unexpected turn the album has taken after “Krdtay”, with the violin and percussive vocals at the beginning making the song sound like it belongs in Game of Thrones or another medieval fantasy world.

Martyn ends this album on the most stripped back track, “Reason Child”. Acting as a capstone to the entire project, the clarity of Martyn’s vocals and the simplicity of a plucked guitar creates an atmosphere of sitting around a campfire at the end of a long journey. The song reflects on the tracks so far, harking back to “Weekend Repair”’s notion of a servant, “And now you’re living like a servant, wallowing away your time, but I know you got a reason child.” The haunting harmonies close out the album on a lingering note.

By the end of the album, Las Mar has managed to establish a sound that is so distinct yet so difficult to articulate without naming an amalgamation of influences. Whilst the second half of the album produces some excellent tracks such as “I No Say” and “Reason Child”, they seem to divert from the album’s mission as it is established in the first half of the album.