Legendary R&B and gospel singer and activist Mavis Staples has spent her career utilising her voice to spread a message. Since her time with The Staple Singers, she has been an advocate for social justice. While Staples is blessed with an outstanding solo voice, she has always been a proponent of artistic collaboration. Over her entire career, and for her past few musical projects especially, with great results, she has enlisted the assistance of a slew of incredible, big-name artists to carry her message as far as musically possible. We Get By continues Staples’ streak of teamwork — for this album, singer-songwriter and multi-instrumentalist Ben Harper supplied the songs and the production. The result of this duo is a memorable and timely collection of songs that carries an appeal for change.

From the opening riff on “Change”, We Get By invokes vintage American blues. Bare-bones, 12-bar blues tracks are the base from which Staples’ voice and Harper’s songwriting and production build upon throughout a bulk of this collaborative effort. “Anytime” is an undeniably groovy blues rock track that is impossible to get out of one’s head. The majority of the album stays in this lane, and while that opens up the possibility of the music growing grey and muddied, We Get By successfully avoids being overwrought. No song on the album reaches beyond the five-minute barrier, and the instrumentation and Staples’ voice exude enough life to continuously keep any part of the album from feeling superfluous.

“Stronger” is a good-old-fashioned, dirty R&B song, fit with lyrical references to biblical tales and a monstrous climax of lead and backing vocals. It’s heightened by raucous, strong bass, guitars, and drums. The song “Chance on Me” comes after, and while not as energetic as its predecessor, melds blues guitars and soul vocals as well as any song on the entire album.

“Heavy on my Mind” is the most elegiac of We Get By’s collection — the atmospheric song features only vocals and downtrodden guitar (with the exception of a sparingly used tambourine) — fearful of lingering too long on melancholy, the terrific, heart-racing rocker “Sometime” immediately follows.

While We Get By does focus mainly on the blues, Staples and Harper avoid monotony with some tracks that, while equally within the realm of 1970s influence, move a bit outside the strict blues genre used on so many of the other songs. The use of conga drums and smooth, bouncy guitar and bass lines, makes “Brothers and Sisters” We Get By’s funkiest song and a track that would feel at home on a Parliament album. Further expanding on the musical range of the album, the titular track features Donny Gerrard (of Skylark) on lead vocals, and is the album’s beautiful introduction to its soul music influence that shows itself on later songs like “Never Needed Anyone” and “Hard to Leave”. The album closes with the powerful “One More Change”. The song is the soulful farewell that We Get By deserves, setting sights towards the future. 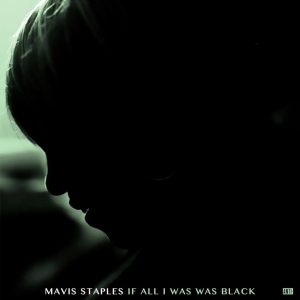 The sound on We Get By is made to sound larger than its humble R&B tracks might initially lead one to assume – via the backing vocals laden throughout the record to highlight and bolster Staples already otherworldly voice. And that really is what sets this album apart from being just another revivalist blues record with a message — Harper understands that his compositions and production cannot outshine Mavis Staples on a song, and on We Get By he wisely chooses not to sonically overwhelm the listener by heavy-handedly inserting himself into the album. Instead, Harper has written and produced We Get By to assist in showcasing Staples as much as possible.

There is a remarkably warm tone to everything on this album, and the music presented is the same music that rises from dark basement bars in the southern United States and forces passersby to stop what they are doing and listen, and breathe. We Get By is a simple album. There are no songs that reinvent the wheel or push the boundaries of blues and soul. Because of this, everything on the album feels classic.

The music on We Get By perfectly accompanies the Gordon Parks photo that serves as the album’s cover. Just as Parks utilised his art to comment upon the contemporary reality of America, Staples and Harper are attempting to do the same — this is an album that’s enveloped in the complicated and frustratingly stagnant process of progressive change. And while Staples and Harper use We Get By as a means to reflect upon the challenging contemporary American moment and the changes still necessary to be made in order for the country to achieve something better for itself and its people, it is an album that is assuredly full of hope.

We Get By is released Friday 10th May via Anti-