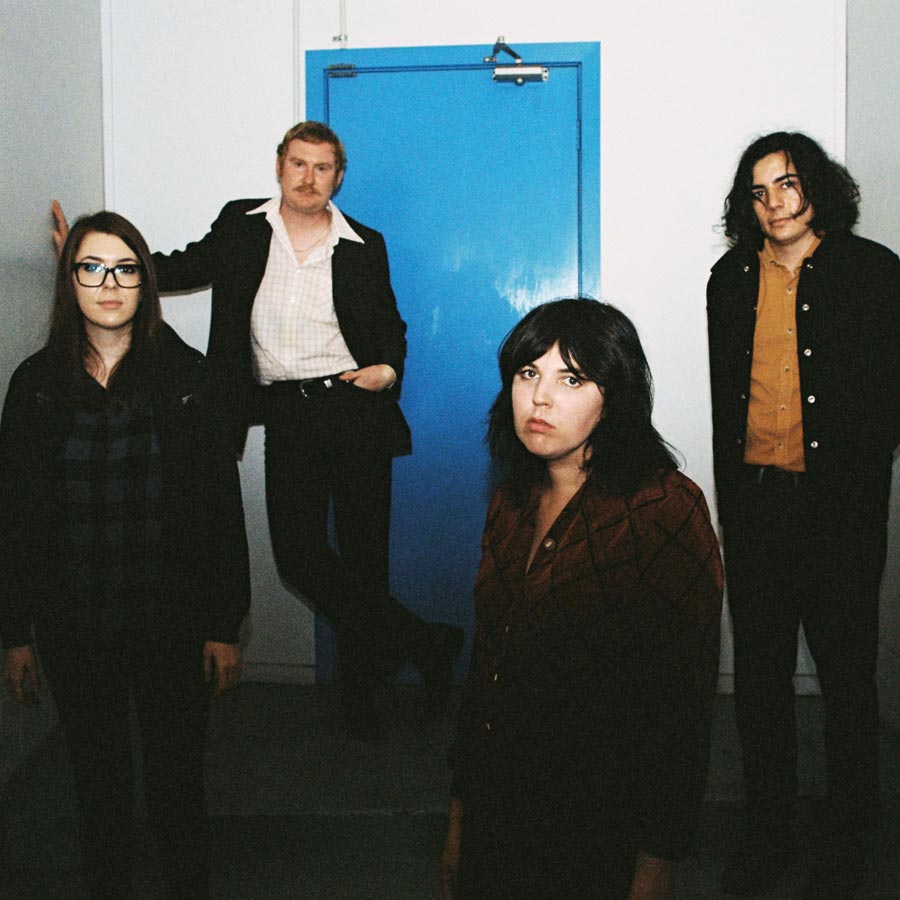 On Feral, the much-anticipated follow-up to their 2017 debut A Quality of Mercy, Melbourne-based RVG continue their contemporary interpretation of post-punk – merging the raw force of punk with the bright jangle of indie rock and the triumphal immediacy of power-pop. Attempting to capture the band’s most authentic energy, these arrangements are recorded live to track, overseen by producer Victor Van Vugt. Van Vugt, who has worked with with iconic artists such as PJ Harvey and Nick Cave & The Bad Seeds, ensures that these tracks are airtight without losing the human feeling behind them.

RVG released the first single “Alexandria” back in May of 2019. Vigorous guitars work hand-in-hand with vocalist Romy Vager’s sincere punk sneers to provide the album’s compelling thesis. Vager’s world-weary lyrics observe worldwide anxiety and makes it tangible for herself, taking the macro and making it personal. “I spent 45 years thinking, proved wrong in a day,” Vager explains on the first line of “Asteroid”, a song that details a personal life-changing event. Venturing into more jangly surf-rock territory, drummer Marc Nolte is particularly effective here; his style is reserved, staying in the pocket while knowing the right time for a lyrical fill.

Angrily pushing back on religious dogma standing in the way of societal progress, Vager plays the role of a fundamentalist doctor on “Christian Neurosurgeon” – “I can see the matter and I can part the ooze, but I can see the devil and the pain he’s put on you.” Demonstrated is guitarist Reuben Bloxham’s diverse playing style. Ranging from bright melodic tones to visceral creeping punk riffs, his contributions are not always complex, but they are always immediate and creative, comparable to Will Sergeant of Echo and the Bunnymen.

The power-pop leaning “Little Sharky” is about a dear friend of Vager’s at age 17. She indulges her friend’s tendency for far-fetched stories, such as meeting Marlon Brando and fronting a successful band. These teases from Vager are delivered in complete endearment. The politically-aware “Help Somebody” aims to fight back against apathetic pessimism during dark times. It is a rallying cry for collective support. “I just wanna help somebody, I don’t want to be mean anymore,” Vager passionately cries out with a sinister howl.

“I Used To Love You” is a straight-talking break-up song. “I used to love you but now I don’t, and I don’t feel bad,” the lyrics go without much room for subtly. The gentle pace of the track allows the melancholy emotions to breathe through. “Prima Donna”, backed by spidery guitar work, expresses the anxiety of being in the public eye, fed through Vager’s sardonic wit.

The ironically titled “Perfect Day” looks out the window to observe imperfect images of a broken environment. “Well here comes the pigeon; I’m gonna tell you it’s a dove. It’s got its head in a garbage can,” Vager says with willingly deceitful eyes. At another point Vager describes using a song she hates to drown out the even more unpleasant sound of a neighbour screaming down the hall. Below the humorous surface of the track, it’s a heartfelt attempt to momentarily reimagine a downtrodden situation into something more fruitful.

An emotive camaraderie of drums and guitar, fully locked in step, can be heard on “Baby Bottle”. Lyrically, it’s a seething, liberating send-off. “I pretend my heart is breaking, but deep down all I’m thinking is yeah, I’m finally free.” The catharsis in Vager’s voice is fully convincing.

“You snap at everyone for taking all your time you could have spent in your room.” On the closer “Photograph”, Vager is trapped in a circular mode of self-loathing, wishfully pretending her outlook was as optimistic as the happy photo she is holding onto. The in-the-moment despondency is communicated through the irrational reactions to small events, giving them unwarranted universal significance. For example, Vager without much context states, “there is a dead bird on your street, and you wonder what went wrong.” RVG provide a woeful downer ballad to give Feral a proper visceral ending.

Feral could accurately be described as post-punk, but that feels too limiting of a description. RVG, while maintaining a notion of cohesiveness, carefully explore various tones and textures to convey a wide range of human emotions. Throughout the record, Vager is internalising global unrest and filtering it through her own personal struggle in a way that most listeners will be able to connect with. Feral is a strong rock album that is worth a listen at a time when it’s become increasingly more difficult to filter through the swarm of hackneyed indie rock albums to choose from.

Feral is released Friday 24th April via Fire Records and Our Golden Friend.