Violet Phase is the second full-length album from Second Still. Comprised of Ryan Walker (guitar), Alex Hartman (bass), and Suki San (vocals), the globally-recognised Los Angeles trio specialises in post-punk and coldwave genres. This release comes hot off the heels of last year’s Equals EP, which featured “Walls”, a song for which the band received some acclaim. Violet Phase is a more-or-less streamlined eight-track playlist of heavy industrial sonic formation and summarised by established tension with moments of release.

Also very heavy is “New Violet”, which follows on from “Mouse” with its dark and cold sound. A pulsing synth is the backbone of the song, and is joined by a descending bass riff that drags the listener down into the mood of the song. Similarly to the opening track, “New Violet” is beyond question of largely sexual motivation. A mostly disinteresting arrangement, perhaps the most engaging part of the number is the high, chiming instrumentation in the outro, which has a static, radio-mimicking soundbite spliced in.

“Double Negative” opens with pace, pushed by the now staple drum machine dance beat. The listener will likely find this song the most musically rich song on the record, as much of the song’s 3:15 runtime contains an intense instrumentation that carries a little bit of variation; variation that has been rather lacking thus far.

“Spiders & Spies” is, for the first time on the album, a slow-paced song, and predictably beholden to melancholy. The airy synths and flanged, detuned guitar tones suggests some of the more dark, experimental pop music of the 80s. San’s vocals on this track are at once most haunting and, in a very bizarre way, seductive. “Spiders & Spies” also features a more rewarding instrumental outro, with sweeping synths that wash over the firm and low primary elements.

At this midway point in the record, the listener might consider the record to be trending in a more curious direction – nodding to some of the more varied and even momentarily nuanced compositional aspects occurring in “Double Negative” and “Spiders & Spies” – and insofar feel a bit intrigued regarding the direction the band is taking.

The second half of the record commences with “The Future”, which hearkens to the relatively more streamlined structure and sound of the record’s first two songs. It maintains some of the more dance-like, industrial qualities that best characterise the record. Materially, it is a bit more existential than Second Still has yet offered on this release; San croons with a hint of pathos, “my body is so old” – a rather terrifying inversion of the hitherto prevalent theme of carnality.

“Special No One” instantly recalls in tone and voice Nine Inch Nails’ 1989 anthem “Head Like A Hole”. The song does own some tension, and that underscores the domestic lyrical moments with unsettling feelings “Mondays are hardest when you wake up in your little bed, Mondays you play the same, saving things from yesterday”. “No one understands, no one”, sings San – the record unfolds small moments of existentialism.

The seventh track is “Eternal Love”, which has a slightly more distilled punk feel. While the title suggests some richer thematic material, the song feels much more geared toward its instrumentation. “Eternal Love” almost serves as a mere refrain for the closest thing to a jam that Second Still has offered us on Violet Phase.

“Idyll” brings the record to a close, and opens with some startling, attacking guitar tones that rather effectively discomfort the listener – note that this discomfort is definitely an intended effect on the band’s part, and which is rounded out by compositional tension. In a laudable move, all the tension and discord sowed by the introductory and verse sections of the song are totally and momentarily released in a finely produced chorus, which is clean, relaxed and melancholic.

Second Still seems to have produced what they intended: a straightforward post-punk record with a hook. While the record does contain bits of existential material that present every now and then, the general lack of lyrical quality or introspection does not offer much to the music in terms of its ability to reel the listener in.

Instrumentally, the record is not strong enough to overcome the lyrical shortcoming – that is generally speaking – but there are some occasions on which the band displays some level of proficiency at composing a complete and engaging song. It is unlikely that listeners who are not disposed to this particular sphere of the music world will be dreadfully intrigued but, then again, that seems to be a large part of the allure and expectation of the place it does hold. 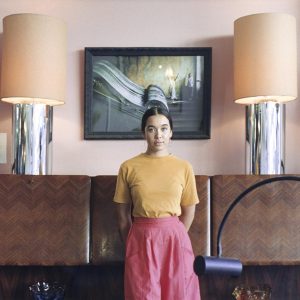