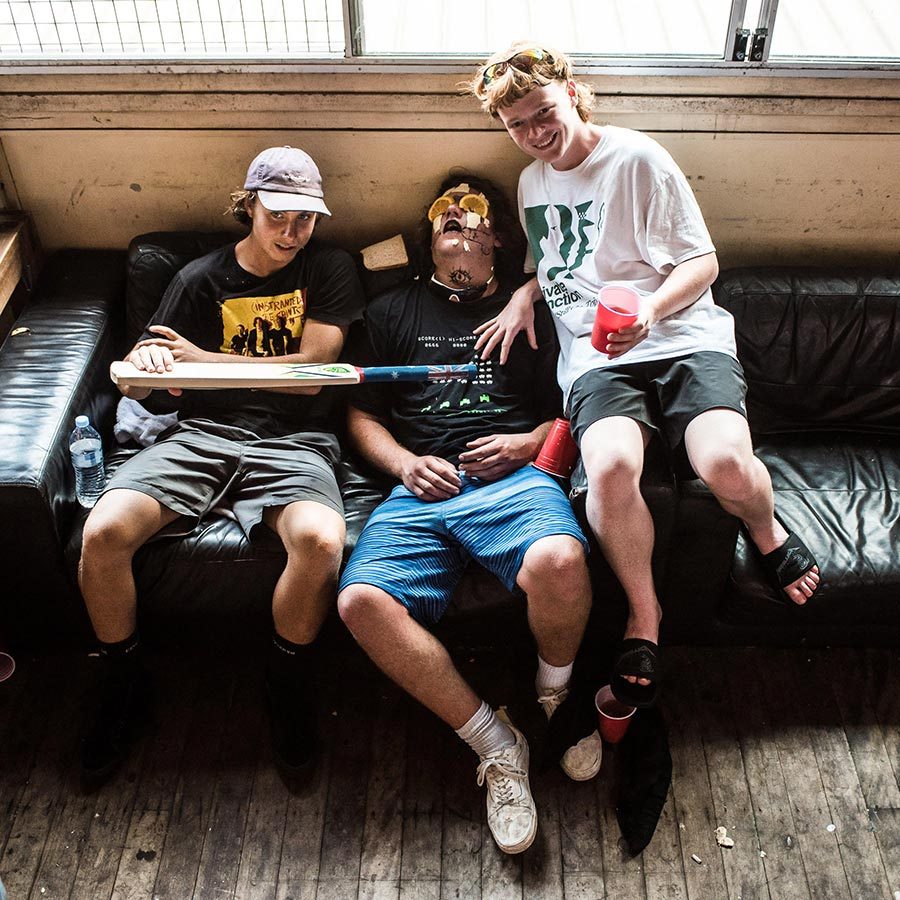 The Chats are a band that fly in the face of critical appraisal more aggressively than others. As singer-bassist Eamon Sandwith has said, “We don’t make songs for people to look at in a fucking emotional or intellectual way… I think they’re good songs, and at the end of the day, if I like it then fuck it, who cares if other people do?” Whilst this makes reviewing their debut LP feel somewhat redundant, the release itself is a deliberate step deeper into the industry with the potential to formally qualify punk’s cult success in a way Amyl and The Sniffers’ recent ARIA win has. It’s disappointing then that High Risk Behaviour feels like anything but, the trio content to exist within their pocket of garage/shed punk without any memorable highs.

The Chats are at their best here when hurtling full-pelt through their brand of blistering Australiana-infused punk as album opener “Stinker” exhibits. Racing away as if cheating the start gun, it dives headfirst into the band’s debaucheries. Sandwith’s tongue-in-cheek warbling lilt binds to Josh Price’s grunting guitar riffs for a high-octane lunacy that’s infectious. Standout single “Pub Feed” goes one better with stronger hooks and finely honed larrikin lyricisms that erupt into a refrain that dares to be left unsung. “Heatstroke” is another fully-formed track that unifies these best elements whilst evoking strong Eddy Current Suppression Ring sensibilities through its verse of twangy bass and melodic guitar inflections whose staccato chorus tempers the listeners’ sense of resolution.

The extremes of the Queenslanders’ unfiltered on-stage indulgence in all things bogan was always suspected to be an inhibitor of their mainstream marketability. Thankfully, songs like “Drunk and Disorderly” and the “The Clap” reflect a resistance to pull any punches. The former catalogues the range of contraband ingested before engaging in a shamanic recounting of cause and effect, “relaxation, mood alteration, boredom leads to intoxication”. The latter adds clever use of percussive claps throughout the regaling of the events surrounding the acquisition of an STD. This polarising opening act is rounded out by “Identity Theft”, whose opening line “I was paying for drugs on the internet” amid see-sawing riffs serves to separate listeners lost to the vulgarity from those won by the honesty and audacity.

With no song lasting longer than 2:50 minutes, there’s little chance to reflect on the instances the Sunshine Coast locals delve a little deeper. “The Kids Need Guns” bares the political bone heard on Sandwith’s bushfire fundraiser track “I Hope Scott’s House Burns Down”. He hereby has a crack at the US gun control debate, breaking out into a chaotic conclusion that mirrors the conflict itself. Whilst less intensive, “Keep The Grubs Out” adds creativity with spoken word verses that repurpose a spray dished out by a security guard/manager to the “grubs”. These moments underscore the 18 months spent at Billy Gardner’s Geelong studio crafting the album.

Regardless of the listener’s commitment to the cause, it’s impossible to deny there’s instances of derivative songwriting on the record. Songs like “Billy Backwash’s Day” steal the compositional components from “Pub Feed”, whilst “Dine and Dash” feels like a second, less successful stab at the same track – albeit with a chorus that’s disjointedly buoyant from the band. “Ross River” too, feels like a repurposed “The Clap”. This sense of predictability goes against the volatility of their live shows and creates moments of tedium on an album that’s already only 28 minutes long.

The Chats manage to finish as strong as they started, however, redeeming the record with songs evoking hints of artistic expansion. “4573” sees Price experiment with some psychedelic effects before a lead lick snowballs into a defiant chord progression. “Do What I Want” is made memorable for its plucky bass riff that feels inspired by The Saints – its only misgiving being the outworn and juvenile chorus “don’t tell me what to do”. Closer “Better Than You” suffers from a similar fault but reaches a resounding anthemic high without sacrificing their garage rock roots. It also hints at promising things to come.

On their first long player, The Chats double down on the absurdist Australiana and breakneck punk attitude that’s already won them a devoted and high profile following. Bookended by its strongest, most distinguishable material, High Risk Behaviour ironically feels a little too safe at times. The highs aren’t as consistent as standout singles have suggested, but the trio should be commended for sticking to their guns without watering themselves or their style down. Hardcore fans will adore it, but casual observers might be left wanting due to the album’s inability to do the band’s live presence justice.