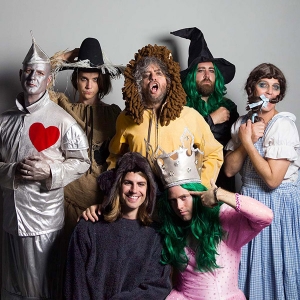 After 17 studio albums, it would be insultingly reductive to try and categorise the career of Wayne Coyne and co. Spanning alt pop, psych-rock and more experimental noise noodlings, The Flaming Lips’ discography is best dignified by soulful drama and sincere messages of morality thread through ever-changing soundscapes. On their second LP of 2020, American Head, ’70s Americana acts as a perfectly apt, if not potentially safe, canvas for Coyne to paint on. However, it’s in the heart-wrenching delivery of anecdotes evoking lost innocence and suffering through drug use, from a band otherwise once synonymous with such activity, that proves The Lips are as relevant as ever.

Following Tom Petty’s death in 2017, Coyne became fascinated by the American artist’s pre-Heartbreakers period, playing and travelling across America with Mudcrutch. As a form of fan fiction imbued with Coyne’s personal experiences seeing his brother in-and-out of prison, The Lips are envisaged as stoned-out music makers of that era coming to grips with some harsh realities. More comedown than psychedelic trip, American Head induces the deep sorrow of living a lifestyle dedicated to drugs once the high has worn away.

Whilst a dreamy opening dive, “Will You Return / When You Come Down” represents a transient euphoria before the ensuing crash. Though the luscious George Harrison-esque arrangement feels heavenly, it’s through Coyne’s croon that we realise this is merely subterfuge for the darker actual existence; “Now all your friends are dead, and their ghosts, floating around your bed”. With each verse feeling like an ascent over its predecessor, it’s in the concluding cacophony of synths and lead guitar that we see there’s only one way things can turn if elevated too high.

“Watching the Lightbugs Glow” follows up with a woozy instrumental arrangement that exudes the senses of one coming to terms the day after the night before. Glistening synth revolves around Kacey Musgraves’ vocal coos that climax just as much as they fall into sombre self-realisation. It blends seamlessly into the downtrodden psychedelia of “Flowers of Neptune 6”, unassuming in its gentle strums and cascading synths before the hard-hitting chorus rises with theatricality out of nowhere. Crying out with horror in helplessness, Coyne delivers his first dagger; “Oh my God, why is it them, oh my God, now it’s me”.

Reverting to more exploratory psychedelia, “Dinosaurs on The Mountain” plays as both a fanciful ode to those reptiles long lost as well as a macabre commentary on what society is left to harbour; “Now that it’s burned off, The scum of the Earth, I wish the dinosaurs, were still here now”. Without over-impressing, its implosion of resonant synths and haunting choral harmonies keep the arrangement compelling. It is dwarfed, however, by the tragical nostalgia of “At the Movies on Quaaludes”. The whimsical recount of what its name implies soon turns to deliver another devastating chorus, flooring the listener in a juxtaposition of saddening euphoria as the narrator resents his own waste; “We’re so high that we, forget that we’re alive, as we destroy our brains ’til we believe we’re dead”.

There’s more overt melodrama on “Mother I’ve Taken LSD” as Coyne reckons with the evils of the world otherwise obscured from his hallucinogenic view. Coloured by flourishing instrumentation, it’s through a concise conveying of guilt that the Oklahoman adds another arresting moment to the record; “Now I see the sadness in the world, I’m sorry I didn’t see it before”. The arpeggiated synth and death march percussion leaves “Brother Eye” a little bit harder to sink into. Whilst esoteric in its opening, the converse simplicity of Coyne crying for his brother’s immortality justifies the obtuse arrangement as a deeply affecting tribute to his embattled brother.

“You n Me Sellin’ Weed” offers another nostalgic slow burner. Coyne pairs with his guitar and Soundtoys Crystallizer plugin to impart stories of him and his girlfriend living as “The king and queen, dope dealing celebrities, and we’re free”. However, a vinyl scratch sharpens the lo-fi vocals in tandem with the tale unravelling the other side of the coin, as if fast forwarding 10 years and revealing the underlying inescapability; “Driving to work, as the sun’s coming up… dreaming that one day, we’ll get out of this scene”. What was once seen as a life without limits is now viewed as far from freedom.

The most moving of the forlorn bunch is “Mother Please Don’t Be Sad”. With Coyne reflecting a fictionalised account of a real experience being mugged at gun shot, albeit with a far bleaker ending than what reality offered, he speaks to his mother from beyond the grave. Guilt is again used as a remarkably crushing theme with the potential to help people realise the impact of what they leave behind once departed. Waltzing keys are enhanced by strings and a wind section to make Coyne’s plaintive remorse deafening, “I didn’t mean to die tonight, I won’t see you tonight”.

An epilogue follows in the form of “When We Die When We’re High”, taking the chorus lyrics of its predecessor. Trancey synth and driving drums combine with the piercing resonance of xylophone rings for a soothing respite that still carries the weight of what came before it.

“Assassins of Youth” ramps things up late as a cracking ballad that harkens back to classic 60s folk-psych. Pace builds and tempers as Coyne farewells his innocence with venom; “I was young yesterday, but now everything has changed after today, and I don’t know what to do”. An electronica mid-section further establishes the song as a sonic chameleon, gushing through other genres similar to how a teenager’s own tastes change as they morph into adulthood. It’s the understated masterpiece of the record.

Kacey Musgraves features again on the haunting dreamscape of “God and The Policeman”, backed by sweeping synths and tinkling bells. The call-and-response between her and Coyne mimic one grappling with their own conscience and justifying the past.

Closer “My Religion is You” leaves you with hope without losing the pretence of songs come before it. Redemptive through its combination of chords and Coyne’s resolute placating his salvation ascribed to a loved one, it’s integral for offering an answer to the record’s moral woes. It urges us to overcome fallibilities by summoning strength from whichever religion you make for yourself.

American Head feels like the record equivalent of catching an offspring smoking a cigarette and making them smoke the whole box to appreciate the devastating effects of what was once so sweet a hit. Presented in tragic earnest, Wayne Coyne delivers some of his most moving compositions and moralistic missives that’s replete with symbolism and enough of the band’s stapled experimentation to keep fans keen. The Lips hereby cement their significance for another decade, not that it was ever in doubt.