Ambrose Kenny-Smith and Matt Blach are no strangers to making music together, having played in multiple outfits since primary school, the latest being The Murlocs. Originally hailing from Ocean Grove, Australia, the band returns with the release of their fourth studio album, Manic Candid Episode. Sharing members with Australian psychedelic workhorses King Gizzard & the Lizard Wizard, The Murlocs endeavour to create their own sound heavily entrenched in the blues-rock style. An unfortunate by-product of this influence is that there aren’t a lot of original ideas on display. 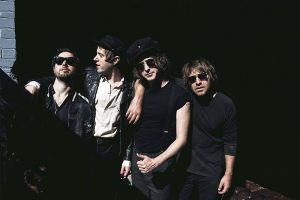 Kenny-Smith’s self-taught harmonica and Graeme “Shirley” Strachan-style vocals do bring a certain sense of individuality to The Murlocs, however, the overall sound is not innovative or revolutionary enough to set them apart from other similar artists. The tracks off this record would sit well in a playlist of other blues-rock artists like The Delta Riggs, Ty Segall, DZ Deathrays, FIDLAR and The Cribs with their collective mixture of blues, rock and punk styles. Manic Candid Episode showcases some solid songwriting ability, without offering much more.

The record opens with self-deprecating number “Problematic Subject”. Full of fuzz-driven guitars and searing harmonica, this song pushes through at a moderate pace. Kenny-Smith’s brash vocals lament about his own personal weaknesses; “Natural instinct to act defensive when you’re a problematic subject.” Closely following the classic blues structure, as much of the album does, it toes the line of familiarity and engagement. It’s stimulating to listen to but ultimately, it’s nothing that hasn’t been done before.

The two singles off the album, track two “Withstand” and track five “Comfort Zone” are understandable choices for early release. Both are standouts on the record, especially “Comfort Zone” which provides some desperately needed contrast to the head-splitting rock. “Withstand” is another track that doesn’t particularly break out of the blues style, however it’s rough sounding harmonica, rising vocal melody and ‘jazz hands’-style outro makes it a definite crowd pleaser. Alternate to this is the slow ballad “Comfort Zone”, which is easily the best song on the record. Although it still doesn’t break away from preconceived musical ideas, it does demonstrate The Murlocs’ ability to write sensitive music with the addition of organ bringing a new sound to the mix. Exploring themes of insecurity and inner turmoil, this track is a heartfelt and passionate self-reflection.

The title track “Manic Candid Episode” ebbs and flows back and forwards in a slow rocking fashion. This track features a ferocious and fuzzy psychedelic guitar solo which is the real highlight of the song amongst busy drum fills and frenzied vocal melodies. Kenny-Smith’s voice becomes more anxious as the song progresses which fits with the theme of the tune, that of having a “manic candid episode” which brings an extra level of complexity to the track.

“Spun Gun” demonstrates the band’s proficient songwriting ability with an extremely well-constructed fast talking vocal melody, keeping the listener on the edge of their seat before sitting back for the chorus. This song feels more original than most off the album, marking a slight difference from the blues-rock sound that has been liberally applied to other tracks.

Track six “Catch 22”, named after Joseph Heller’s 1961 novel of the same name, captures the idea of this paradoxical situation in relation to an impending World War III. “What’s the point when we just keep on running running?” The Murlocs have managed to condense a very complex circumstance into a catchy pop-rock song just over three and a half minutes in length with relative success. The bass part in this track is the most impressive part, shifting between thumping root notes and half-speed walking, pulling and pushing the emphasis to create contrast between sections.

The style shifts back to typical blues-rock in track seven “The Bigger Picture” with overdriven guitar, harmonica and driving snare hits. This song is catchy but again, isn’t anything that hasn’t been done by artists like The Raconteurs and many other bands of the same style. It also has an underwhelmingly unimaginative guitar solo that feels like it should go somewhere more complex but refuses to.

“Samsara Maya” sees the band delve into existential religious beliefs. Samsara, in the Hindu faith, is a continuous cycle of life, death and resurrection. Maya, or illusion, is the belief that humans are autonomous and separate from the rest of reality. This separation can lead to bad Karma which perpetuates the cycle of Samsara. For The Murlocs, it takes the shape of a personal crisis of faith and a questioning of one’s beliefs. “What do I believe in anymore?” asks Kenny-Smith as he lists the consequences of his past indiscretions. Subsequently, this is one of the better songs on the record because it does tackle some rather universal themes, however, condensing a four-thousand-year-old religious belief into a three-and-a-half-minute pop song may be misconstrued as insensitive.

The upbeat piano-based ballad “Buffoon” offers some instrumental and stylistic contrast amongst the other guitar-heavy songs on the record. It is a welcome change of pace before the last two tracks “What if?” and “My Compromise” which are both heavier blues numbers featuring harmonica similar to Black Sabbath’s “The Wizard” (1970) mixed with country style blues. Both tracks make for a strong conclusion to the record, but feel somewhat borrowed, a recurring theme throughout the whole album.

To summarise, The Murlocs have created an album that is happy to sit within the confines of its chosen style. Manic Candid Episode is content with reusing an old formula without breaking any new ground. Fans of high energy blues-rock will appreciate the addition to their extensive collection of comparable sounding artists, however, anyone looking for radical new sounds will have to search elsewhere. Rather than making significant strides throughout their career, The Murlocs sound like they are too rooted in the sound they discovered in their early days and the only aspect they have improved on is the production value. This is an album of recreation rather than innovation.