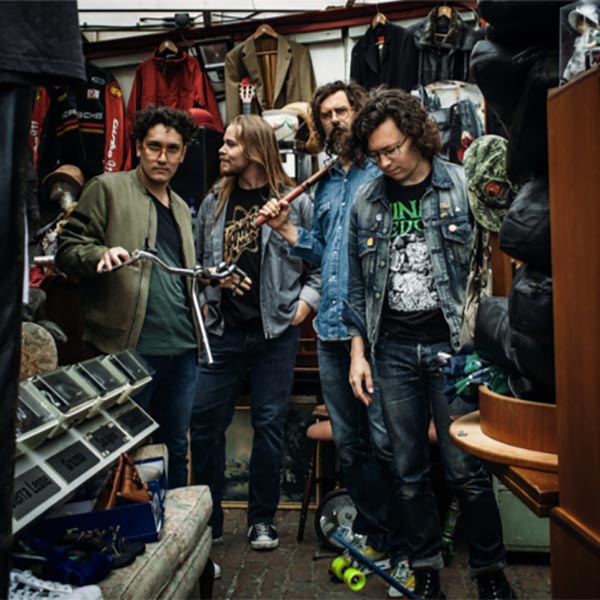 Performance, the seventh LP from American rockers White Denim, is an organic and light-hearted affair that borrows from the genres of soul and funk in addition to the garage roots of the quartet. White Denim are revered for sustaining the energy and carefree nature of rock’s glory days, and Performance continues on that notable streak. A succinct effort, the record picks a fine balance between straight-forward rock essentials and more sporadic, jam-like sensibilities that the group so finely produces. While the band’s press release proudly proclaims that they “write songs just dumb enough to drink, dance and fight to,” Performance is much more – there are a few tracks here that bend the mind.

Lead single and first off the rank, “Magazin” catapults the listener into a swaggering classic, after a quick segment of radio babble. Aside from the sustained melody on the chorus hooks “shined teeth, nice dream,” the most powerful asset of the track is the arrangement of its woodwind section. The strong presence of baritone and tenor saxophone helps reinforce the bruising chorus riffs, and gives a flair to a track that would be non-existent with guitars alone. The song is built upon massive chords with some noodle-y additions, and small details such as tiny glitches and drum effects build a formidable atmosphere. The fuzzy goodness of the guitars, a constant on the album, does ensure the track stays rooted in the tones that older fans know and love. The saxophone solo, with its heavy reverb and modulation, may seem hilarious, but ultimately concludes this effortlessly cool track in most fitting way possible.

The title track holds the record on its expected course, featuring some lovely chorus harmonies and silky verse chords. The short song is remarkably catchy, and finds time to explore a short krautrock-inspired section. This fleeting motif introduces a glistening electric piano solo, with the vibe being that of early Heaters. The track ends on a frantic and loud culmination of riffs, bringing us straight into “Fine Slime”. With its understated floor tom foundations and quiet guitar slides, the track is sleazy, but it weaves in some slamming chord-based sections to add some frenetic energy. But the track does become slightly tiresome. Even while its sprinkling of triplet rhythms and indie harmonies do combat this, the track knocks on the door of five minutes and doesn’t achieve much.

“Double Death” appears to be White Denim’s take on the more soulful side of rock, with the heavy use of tremolo, acoustic guitars and a vintage organ fully representing this. The song is very dense in its structure and mix, and a plethora of interconnecting and overlapping parts form an intricate blend. The cut is made even more enjoyable with some great vocals from front man James Petralli, as he soars to some impressive high notes. A quick tempo change and some woodwind lines bring easily one of the best tracks on the record to a close.

For fans of the aforementioned “Fine Slime”, “Moves On” provides another hit of no-nonsense rock goodness, ensuring the genre balance of the album is maintained. Short sections of odd time keep the four minutes interesting, and the monstrous fuzz tone on both guitars is reason alone to listen to the track. Following this is the bluesy, boogie inducing “It Might Get Dark”, which toes the line between neo-country and psychedelic rock. The employment of acoustic guitar lines, four chord progressions and tight guitar transitions show a refined and neat song structure White Denim are capable of. The following track “Sky Beaming” consists of a controlled chaos of sorts, taking place in time signatures you sometimes can’t quite pin down, and jumping from idea to idea. While the track itself may be difficult on a first listen, it proves to be the most out there and experimental track on Performance. The track is hard to describe, but some lovingly harmonised vocal lines and some consistent and spiralling guitar parts do form the melodic backbone of this wacky cut.

“Backseat Driver” is slightly looser in structure than “Sky Beaming”, but it lacks the bizarre rhythms and subdivisions previously mentioned. Groovy synth runs and two chord verses ground the song, but the track jumps around to sections of 70s rock screams, dreamy indie, and one of a White Stripes feel. The latter is possibly the best, and the song takes its time to explore it further. The song isn’t a shamble, but it could certainly be improved upon with an expansion of some sections and a culling of others. There are some admirable touches on the track however, such as the cheerful vibraphone solo or gnarly bass tones.

“Good News”, a slower track, concludes the album with sing-along phrases and jangly, sparkling acoustic guitars, contrasting with the other eight songs. The song is perhaps the most heartfelt of the bunch, diving heavily into the vibe of folk rock, in a fashion similar to Neil Young. Creamy fuzz on the lead phrases is a nice addition to the chilled-out track, while arpeggios and poppy chords prevent the track from falling into the dull partitions ballads are susceptible to. The standout guitar soloing and fantastic vocal performance end the album in a grand manner, summing the individual tracks to a commendable overall output and effect.

With the record fading out acoustic ramblings and synth warps, Performance certainly paints an interesting picture of rock music’s future. White Denim are arguably one of the most dedicated and fierce figures in rock today, and although Performance is certainly a reflection, it also a strong direction. While it may not save the genre, this new album is certainly an enjoyable listen.